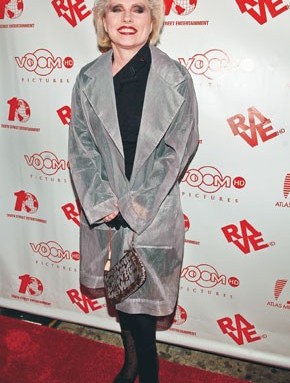 At the Tribeca Film Festival, running from April 23 to May 4, three documentaries made by and featuring hometown stars reveal New York in all its messy glory.

SYNOPSIS: SqueezeBox!, the weekly punk drag party that launched “Hedwig & the Angry Inch,” ended in 2001, but moviegoers can relive it for one more night. Saporito and Shaffer conducted scores of interviews and dissected hours of amateur footage caught by patrons and the club’s Web camera to piece together this oral history. “SqueezeBox! was about finding a place in this world where you could express yourself in the way you wanted,” Schaffer says.

WATCH FOR: Debbie Harry performing a cover of the Plasmatics’ “Sometimes I” with club regulars, the Toilet Boys. Also nudity, profanity and Rudy Giuliani’s infamous “Quality of Life” TV spots scattered throughout the film.

BEHIND THE SCENES: Some interviews were filmed inside a van parked in front of Don Hill’s during SqueezeBox!’s 10th anniversary party in May 2004.

SYNOPSIS: In December 2006, Schnabel documented his friend Reed during the first live performance of “Berlin,” the controversial concept album Reed released in 1973. Schnabel transformed St. Ann’s Warehouse into a Berlin hotel to set the stage for Reed’s lyrics, which follow a couple, Caroline and Jim, as they battle drugs, depression and each other.

WATCH FOR: Reed’s encore performance, which includes a duet of the Velvet Underground’s “Candy Says” with Antony of Antony and the Johnsons.

QUOTABLE LINES: “Men of good fortune often cause empires to fall/While men of poor beginnings often can’t do anything at all.” — Reed’s “Men of Good Fortune.”

BEHIND THE SCENES: Schnabel’s daughter, Lola, directed short films starring Emmanuelle Seigner as Caroline, which were projected on the walls.

CAST: Steven Weissberg, patriarch of the clan who built the hotel in 1925, Ian Schrager, Mick Jagger, David Bowie, Paris Hilton and Karl Lagerfeld and the “Three Musketeers”: a trio of hotel tenants who refused to leave their home of 30 years during the recent renovation.

SYNOPSIS: Keeve documents the checkered past of the hotel, dubbed “The Gram” by its hard-partying guests. From the glory days of rock ‘n’ rollers past to its current incarnation as a trendy nightspot, Keeve gives a history lesson on the “delightmare,” as he calls the institution. His cameras also documented every painstaking step of Schrager’s slick overhaul, including the arrival of a $15 million Warhol for the lobby and a $10 million chandelier. “We were exploring all these issues of how New York is changing,” says Keeve. “Is it losing its soul, [or] are we just a bunch of old farts longing for good old days that weren’t?”

WATCH OUT FOR: Archival footage of Aerosmith’s Steven Tyler rolling around on the bed in his hotel room, claiming he’d snorted up all of Peru.

QUOTABLE LINES: “New York is change. It don’t blow over in a storm.” — Leee Black Childers, a longtime hotel denizen.

BEHIND THE SCENES: When the hotel had been redone, the obsessive Schrager ordered his staff to rotate every filament of the 2,000 lightbulbs in the hotel awning to face the same direction.