Designer-turned-artist Alexsandro Palombo's bedridden state hasn’t stopped him from making his presence known in New York in a far from subtle way. 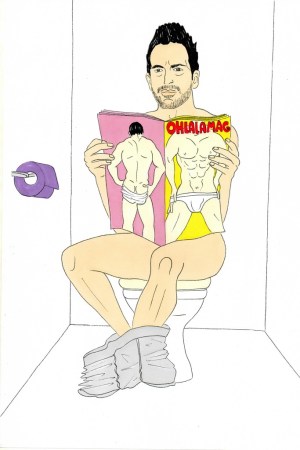 DRAWING THE LINE: Designer-turned-artist Alexsandro Palombo is bedridden recovering from cancer, but that hasn’t stopped him from making his presence known in New York in a far from subtle way. One thousand issues of his eight-page Humor Chic newspaper will be distributed by people wearing his Anna Wintour-inspired masks before select shows like Alexander Wang’s and Diane von Furstenberg’s. Readers will find colorful, oversize drawings of Karl Lagerfeld, Bernard Arnault, Marc Jacobs, Tom Ford, Ralph Lauren and other fashion icons in less than flattering poses. One page in particular features 12 fashion insiders each seated on a toilet. Limited edition T-shirts and prints of his Humor Chic drawings are available at humorchicart.com.

Via e-mail Wednesday, Palombo said his work is meant to be all in good fun and he is not worried about how those featured might react to his drawings. “In actual fact, I am more worried about my health, now that really is important. This is art, dreams, visions, freedom, and it’s a great privilege to be captured and be depicted in the world of Humor Chic,” said Palombo, adding there is nothing he would change about the fashion world.