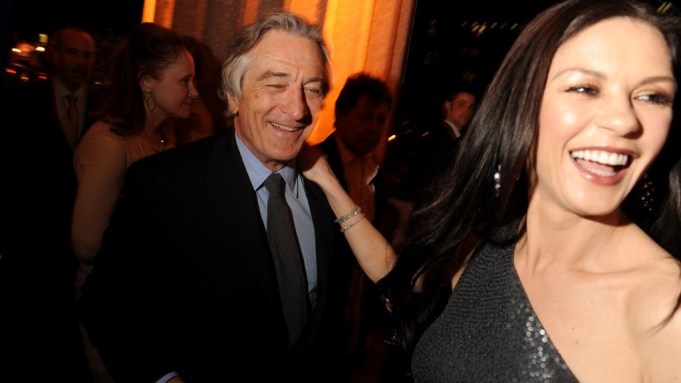 DRESSED DOWN: Judd Apatow’s new film, “The Five Year Engagement,” premiered at the Tribeca Film Festival on Wednesday, so since he was in town he made a stop at Vanity Fair’s annual party the previous night, on the balcony of the State Supreme Courthouse. He stood near Dakota Fanning, in hot pink Lanvin and a halo-esque headband, and Leelee Sobieski, posing for an endless stream of photographers with her slicked-back hair and floor-length white Jil Sander dress. Apatow had no idea people dressed up for these things. He wore jeans and a long plaid shirt. “I’m wearing John Varvatos and I think I look pretty good but I thought this was a film festival like Sundance and everyone would be wearing parkas and sweaters,” he said. “I guess the Vanity Fair thing is something you have to pay attention to.” Apatow said this was his first film festival. “I thought this would be a bunch of scrappy, dirty, independent filmmakers,” he said.

Looking at the crowd, definitely not. The Hollywood contingent showed up early, with Michael Douglas and Catherine Zeta-Jones, in a silver, one-shoulder dress from Michael Kors arriving minutes before Billy Crystal. Robert De Niro caught up with Harvey Keitel. Julia Louis-Dreyfus was overheard talking about “Veep,” her new show on HBO.

Plenty of fashion designers turned out as well, including Donna Karan, Diane von Furstenberg, Tory Burch and Rachel Roy, who had movies on her mind. “My brother’s a film curator of the MoMA and he told me to go see ‘The Artist’ before anyone was talking about it, and then I have my other critic, which is my 12-year-old, who wants me to see ‘Horrible Bosses,’ so I have a good balance in my life.” So does Apatow, it seems. Later, he caught up with WWD and revealed he would be wearing a Lanvin creation to his premiere.