DroppTV, Which Allows Artists to Sell Merchandise in Their Videos in Real Time, Set to Debut

Videos are seeded with merchandise that can be purchased by a click.

DroppTV, which has built a platform for audiences to purchase a product on demand from the comfort of their couch while watching live or pre-recorded media with the click of a button, will launch April 26.

DroppTV gives brand and artists the ability to sell merchandise in their videos, using a patented “see, it, want, it, get it” advanced AI smart video technology. Viewers can tap their screens to instantly buy what they see: T-shirts, hats, sunglasses, etc., allowing artists to monetize their music videos.

According to chief executive officer Gurps Rai, DroppTV is where culture meets commerce.

“So if you’re watching a music video and you like the sweater, you click on it (or tap on it from a phone) and purchase it immediately. That’s the platform,” he said. This doesn’t disrupt the video’s flow of action, and the viewer can stay in the video and the item goes straight to their cart.

He said the viewer can find their videos through Instagram, but they watch it on the DroppTV platform,(Dropp.tv or @dropptv), which is found on the web app which works in the browser. It adjusts itself to be optimized on a computer or a phone, Rai said. 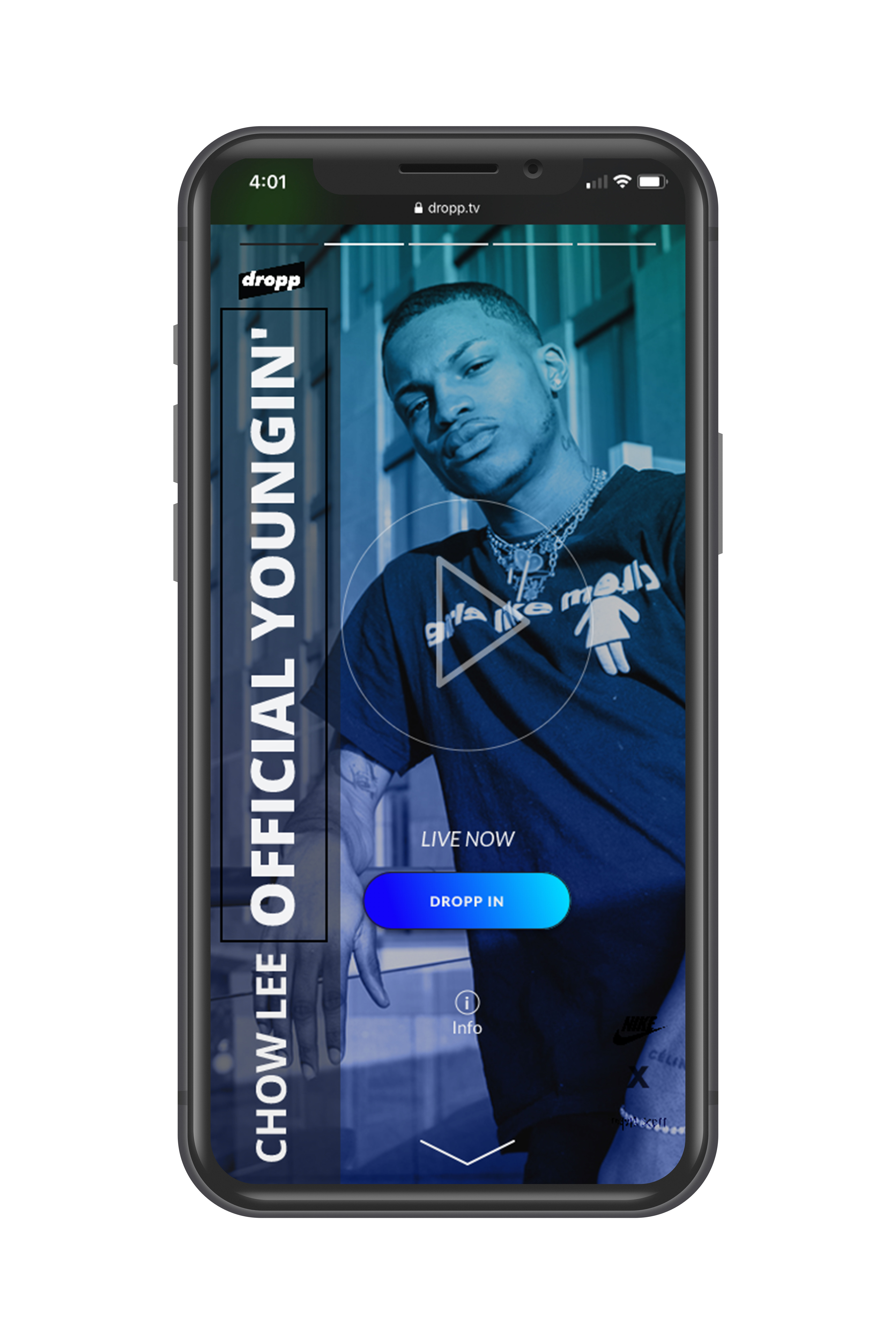 An image from DroppTV.  5th Ave.

While the idea of interactive entertainment isn’t new, DroppTV creates an environment and a community where the call-to-action is actually inside the content the viewer is watching. Soundcloud artists including Manny Litt,  PFire and Suzi posted videos to DroppTV’s beta platform and within hours each artist was generating revenue.

The DroppTV platform is powered from the company’s proprietary artificial intelligence, machine learning and computer vision algorithm, which recognizes products from its proprietary e-commerce platform and tags the videos automatically in real time. This allows for frictionless, one-click in content purchasing. Rai said that means that every video becomes a virtual pop-up shop without disrupting the creative flow and entertainment experience.

Rai noted that some artists have deals with brands or have their own line. He always tells artists to focus on their own merchandise so they keep 100 percent of the profits. “We kind of push that on them a lot. Also, a lot of these guys have brand deals, or we get them deals,” he said.

DroppTV will launch with six artists. One of the artists is Ashanti, a Grammy award-winning, multiplatform singer, songwriter, music producer and recording artist. She is releasing her album in May (her world tour was recently suspended), and is shooting her new music video with DroppTV for the launch. Ashanti has her own merchandise, designed by Willie Esco that she will wear and can be purchased within the video. She will also be wearing unreleased hypebeast sneakers. These, too, will be shoppable within the video.

Another artist is Chow Lee, an independent up-and-coming artist. He is well-known for both his hip-hop and skateboarding skills. His video will be seeded with Travis Scott sneakers. The sneaker, which is featured in Lee’s video, will be a limited “Dropp” and is one of the most highly sought after sneakers on the market, Rai said.

“He’s a kid with a lot of potential. He’s hot in Harlem and the Bronx. He came to us thorough a video director. Rai noted that StockX is currently selling the sneakers for more than $1,000. “We will sell it for $300 (close to the original box price) on our platform, but you must buy it with the artist’s merch. We are the only place you can find this coveted sneaker for an affordable price. You could purchase this particular product on other reseller platforms if you want to pay a significant increase from retail, but why would you?” Rai said.

Overall, he explained, “You’re supporting the artist and helping people discover him. Instead of him spending $100,000 on a music video and not making any money, he keeps 100 percent of his merchandise revenues,” Rai said.

Rai noted that if a viewer watches a video on Instagram, the only way to purchase the merchandise is by utilizing the Instagram swipe up, which leads them to the DroppTV page where they can shop.

In addition to Ashanti and Chow Lee, DroppTV is launching with Suzi, Manny Litt, Cacsio, and both sons of rapper Doug E. Fresh, Droptopslim and Trips SOG.

“We will be using a strategy of at least one macro-influencer a month [who have at least a million followers], dropping an exclusive music video accompanied by a group of microinfluencer music videos,” he said.

He noted that they will also offer augment reality technology for its marquee or macro artists for pop-ups. This patented technology allows users to point their screen at any logo that serves as a trigger and they can purchase products in realtime wherever they are, in the street, at a concert or near a billboard.

In light of the current environment, Rai also believes some of the larger brands may start seeding DroppTV videos with their products.

Rai noted that traditionally Nike, Adidas and other large brands are highly selective about who they allow to sell online. But since the pandemic, he said there is so much more stockpiling that now these big manufacturers have loosened restrictions to allow these stores to sell online. Many of the smaller boutiques and chains have never focused on online sales.

“They either do not have web sites or if they do, they lack the traffic to sell the marquee products effectively online. In addition, they don’t have budgets to employ influencers to help them sell and elevate the status of their online sites,” Rai said. “They have no way to promote their stores and are already struggling to pay bills. What they do have is access to DroppTV and the ability to seed our videos with products where our influencers and site sell their product for them.”

Rai said his target audience for DroppTV is the Gen Z consumer 16 -to 22-year-olds.

During its beta testing in November, DroppTV held its first sneaker raffle with Urban Necessities. It launched the Dollar Snkr Club and shoppers paid $1 to enter the raffle on the DroppTV web site for a chance to win a pair of Yeezy Boost 350 V2 Glows sneakers. The raffle introduced users to DroppTV and doubled its Instagram following from 10,000 to 22,000. He said it was like a digital music festival with lots of big labels. Initial traffic crashed the servers, but it was quickly remedied. There were participants from every single state in the raffle. Due to the overwhelming response, the company decided to give away three Yeezys instead of one.

German streetwear retailer Snipes also produced a two-minute video starring rapper Meek Mill for DroppTV.  DroppTV had a 48-hour exclusive on the video before it went on YouTube. In the clip, the rapper wears Snipes product that was able to be purchased in real time or when the clip was over. Products sold out in 48 hours.

DroppTV is also working with brands such as Ecco, which is trying to attract a younger audience, and Billionaires’ Boys Club, as well as other streetwear brands.

DroppTV takes an 8 percent fee from every transaction. Consumers pay through Apple Pay and Google Pay.

He said the thing that’s good about the platform is you can switch products on and off. Therefore, the artist can have different products and the video can be relevant for five or six weeks, instead of five or six hours.

DroppTV is funded by a series A round of $7.5 million with a diverse group of venture capital investors from around the world.