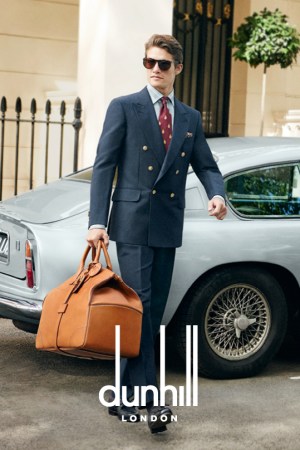 BELGRAVIA BOUND: Peter Lindbergh has taken to the streets of Belgravia in his second campaign for Dunhill, which focuses on the English gentleman. The campaign was shot in London’s Eaton Square — where there are arguably more wealthy foreign gentlemen than English ones — against a backdrop of classic cars and white Georgian terraced  houses.

The campaign features suited men in shiny loafers who are on the move. They’re clutching leather accessories, including the brand’s Duke leather hold-all that looks as if it’s about to be slung onto the back seat of an Aston Martin DB4. The campaign also showcases the brand’s new eyewear collection.

A one minute behind-the-scenes campaign video can be viewed via dunhill.com and via the Alfred Dunhill YouTube page. The campaign breaks in the February and March issues of titles worldwide, including British GQ.

Dunhill’s spring outing continues the theme of the brand’s fall 2015 campaign, which featured the actor Max Irons and models Jack Guinness and Andrew Cooper posing in a private club in London.

The brand’s spring collection was a celebration of its upper-class British roots and a tribute to the British royal family and their habit of never throwing good clothes away.

“It’s about British classicness, town and country and Edward VIII. I didn’t want it to be super-styled,” said John Ray, the brand’s creative director. His broad, rich collection ranged from morning suits and top hats to jaunty v-neck sweaters layered under plaid jackets, and a strong lineup of natty pin-striped suits.

As reported in September, Dunhill signed an exclusive license agreement with De Rigo Vision SpA for the design, production and global distribution of optical and sunglasses collections.

The first line launches early this year and includes some of the sunglasses that models wore as part of Dunhill’s spring 2016 collection in London in June. It will be sold at select opticians and department stores globally, and at Dunhill boutiques.