The visuals were shot by John Balsom and styled by Dan May. 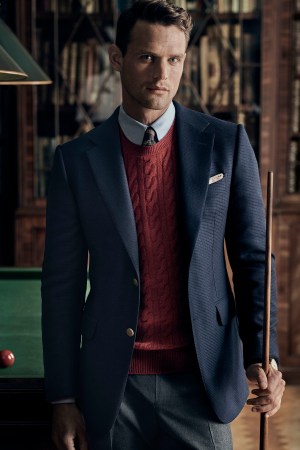 ANOTHER COUNTRY: Dunhill looked to the British countryside to inspire its latest fall 2016 campaign, shot by John Balsom and styled by Dan May.

Set on the grounds of Wrotham Park, an English country mansion in Hertfordshire built in the 18th Century, the campaign and accompanying video feature the Dunhill man driving a vintage car, walking in the house’s vast grounds, playing pool and writing letters with a signature pen from the label’s range.

In addition to the classic tailoring featured in the campaign, there are also cashmere knits, leather blouson jackets and military-inspired overcoats.

Following John Ray’s departure from the company last February, Dunhill was absent from the show schedule during the latest London Collections: Men, which took place in June, throwing a summer party during the four-day event instead to launch a new eyewear collection.

The campaign is featured on outdoor sites at Heathrow airport and will run in select digital media worldwide as of September 1.