DVF and The Newsette to Unfurl The Weekly Wrap

The newsletter will be delivered via e-mail on Wednesdays and will be an ongoing conversation about what it means to be a modern woman.

Diane von Furstenberg is spreading the gospel of the woman In Charge.

She has teamed with Daniella Pierson, the 24-year-old founder and chief executive officer of The Newsette, a daily e-mail offering advice and insight from female founders and industry leaders for the next generation, to launch The Weekly Wrap on Sept. 18. The weekly newsletter will invite DVF consumers into her world of empowering women and industry disruptors.

The newsletter will be delivered on Wednesdays and will include profiles of inspiring females across entertainment, the arts, science, and business, as well as wisdom, stories and advice from von Furstenberg. There will also be a special quarterly printed issue, which will be distributed to all DVF locations nationwide. Pierson will serve as editor in chief of The Weekly Wrap (get it, wrap?). 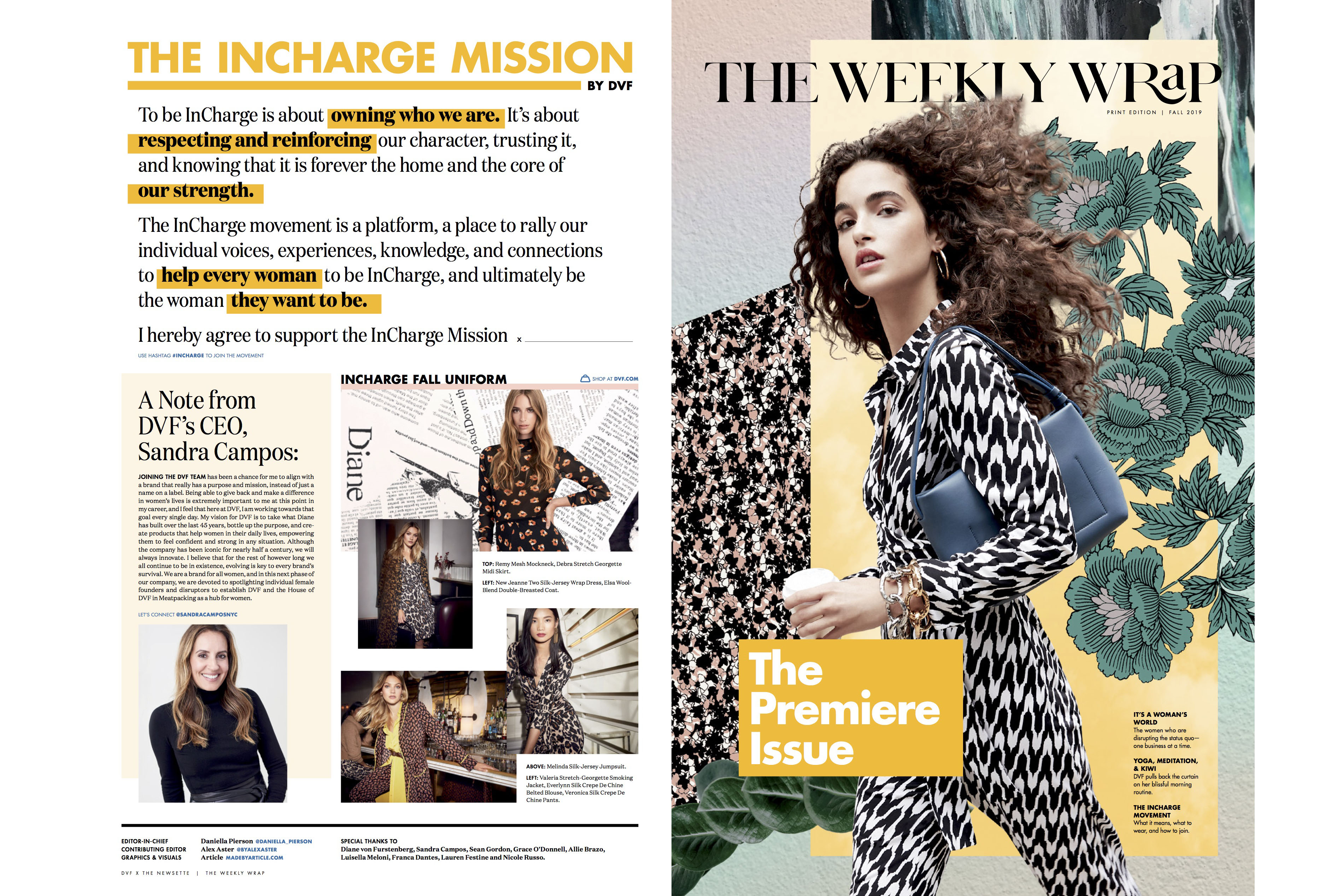 The first issue of the premiere printed Weekly Wrap.

“Sandra [Campos, DVF’s ceo], discovered Daniella and The Newsette, and I was extremely impressed with both,” said von Furstenberg. “I read The Newsette and found it very informative. Daniella is a determined, forceful Millennial who gets it done, which is one of the reasons why I admire her. As our strategy for DVF is focusing more on enhancing our consumer’s relationship with the brand and building our community, the Weekly Wrap seemed like a great idea.”

According to Campos, “As we have focused on digital consumer connectedness this past year, DVF created a media platform incorporating partnerships with video storytelling with YouTube, podcasts, and weekly newsletters with The Newsette. What Daniella has created with The Newsette provides us with an existing infrastructure, experience, and a modern way of communicating with our existing and new members of the DVF community.”

She said that since DVF doesn’t have a blog, this was a way to share stories and content.

“When I was approached by the ceo of DVF, Sandra Campos, about The Newsette potentially working with DVF, I immediately knew that this was my chance to build something big with a brand I had admired since I was a child,” said Pierson. “After meeting Diane and hearing her goals of building an In Charge movement, where women are encouraged to help all women be the women they want to be, I came up with the idea to create a publication that encourages mentorship at scale, by spotlighting the incredibly successful women DVF has access to and also highlighting women in cities around the country who deserve to have a platform.”

Asked who the audience is for the weekly newsletter, Campos said, “We will start with our base e-commerce audience and will expand to reach a broader demographic through the Newsette’s connected community.” She said selling advertising in the newsletter is not currently in the plans, “but we will be open to the evolving nature of media.”

Campos said there’s no expectation for this to be a moneymaker.

She noted that the first quarterly printed issue was released during DVF’s In Charge luncheon last week, and is being distributed to its stores. Among the stories in the four-page issue are DVF’s morning routine; Behind the Scenes of the House of DVF; Spotlight on Disruptors; Diane’s Dictionary; a Questionnaire with Chiara Scelsi, an Italian fashion model, and Around the World with Diane.