As if Diane von Furstenberg didn't already have enough on her plate, she's adding a new role: columnist for Departures magazine. 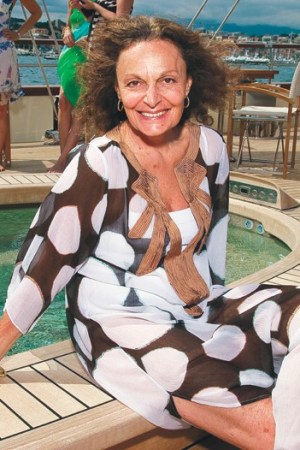 DVF’S MONTHLY MISSIVES: As if Diane von Furstenberg didn’t already have enough on her plate, she’s adding a new role: columnist for Departures magazine. The designer and Council of Fashion Designers of America president will start writing about her jet-set life starting with the magazine’s November/December issue. Departures editor in chief Richard David Story cited von Furstenberg’s “commanding and authoritative style,” and said her own photography was expected to run with the column. “Her whole life is like a Departures magazine,” he said. Von Furstenberg was traveling and couldn’t be reached for comment. Gathering fodder for her column, perhaps? — Irin Carmon

This story first appeared in the August 12, 2008 issue of WWD. Subscribe Today.

BACK TO SCHOOL: Fall means cooler weather, back to school for the kids and fashion weeks in New York, London, Milan and Paris. Style.com is preparing for the latter by making some additions to its Web site. Starting this week, the site will add a beauty blog, called Beauty Counter, written by former Jane beauty editor Celia Ellenberg. The blog will include beauty news, celebrity beauty and on the street looks, and advice from Dr. Pat Wexler and Dr. Lisa Airan in a feature called “The Doctor Is In.” Also, a number of new celebrity avatars will join the Candy Pratts Price one on the site. During the shows in New York and Europe, celebrities and fashion insiders including Leigh Lezark from the Misshapes, Lily Donaldson, Margherita Missoni, Chanel Iman, Jefferson Hack and Tinsley Mortimer will get their very own avatars that will provide play-by-play from the front row. Finally, Coco Rocha has signed up as an on-air contributor to the site, reporting via video from the tents and backstage during fashion week in New York, and additional “day in the life”-type video segments later on in the year. As for the clothes shown on the runways, Style.com editor in chief Dirk Standen said images will be published even faster than before thanks to updated technology, and viewers will have the option to see the shows in a full-screen format. — Stephanie D. Smith

A GOSSIP WRITES ABOUT GOSSIP: The blaring headline is “NYC Gossip Columnist Caught in Sex Scandal,” but, unfortunately, this scandal is all fiction. Patrick Huguenin, a former assistant on the New York Daily News’ Rush and Molloy column who now writes entertainment features for the paper, has a play, “Paper Dolls,” debuting this week at the New York International Fringe Festival, and he’s clearly followed the maxim to write what you know. The protagonist is a 29-year-old gossip columnist for a New York City daily who “loves to dish the dirt — until she gets dirty.” She’s secretly dating the married chief columnist at her biggest rival, only to find herself part of a much bigger scandal that inevitably lands in the papers. Sample dialogue: “You can’t sue someone over the truth.” “With the lawyers I know, you can.” “With the money you have, you can’t.”

A gossip narrative may not be complete without an omniscient blog — and since this is media inside baseball, there’s some old media-new media friction. “The characters view blogs with some suspicion, as I think newspapers tend to do,” Huguenin, who also writes a weekly humor column called “Newsstand Junkie” about celebrity weeklies, he told WWD. “They realize blogs are so powerful and so fast, but they like to think print is king.”

There are few topics reporters enjoy gossiping about more than themselves and each other, so it’s just as well that Huguenin hints at some real-life parallels to the play. “There are some very clear references,” was all he would say. — I.C.