The Chip & Pepper cofounder has a lot of plans for the 50-year-old motorcycle magazine and is on the hunt for more acquisitions.

Pepper Foster is in the magazine business with an unexpected acquisition of 50-year-old Easyriders magazine.

The cofounder with his brother of denim line Chip & Pepper, Foster last year quietly bought the monthly, founded in 1970 and aimed strictly at Harley Davidson motorcycle enthusiasts, more specifically those who liked their bikes and gear with a side of naked women. Already Pepper has redesigned the magazine, its look, ethos and frequency, to be a more inclusive outlet looking to showcase the entirety of the modern motorcycle lifestyle. And in a more upscale way.

“We’ve taken it from what was, well, more trashy, to now being almost like a GQ for bikers,” Foster said. “It’s more lifestyle now, with a different style of shots, higher quality of photos. Women are shooting women even,” he added, alluding to the magazine’s earlier look. Something along the lines of a Playboy-meets-gearhead fantasy.

“One of the reasons I wanted the brand, it’s so iconic, but was never really, properly nurtured,” Foster said. He purchased his first motorcycle in 1989, a time he remembers fondly for being able to ride without a helmet, and grew up with the magazine.

While the purchase price of Easyriders is being kept confidential, Foster said this year he’s looking to get to around $8 million in revenue and said in three years’ time, he’s expecting revenue to hit around $50 million.

“This is a meeting year,” he said. “I want to grow this the right way and hit the right customer.” 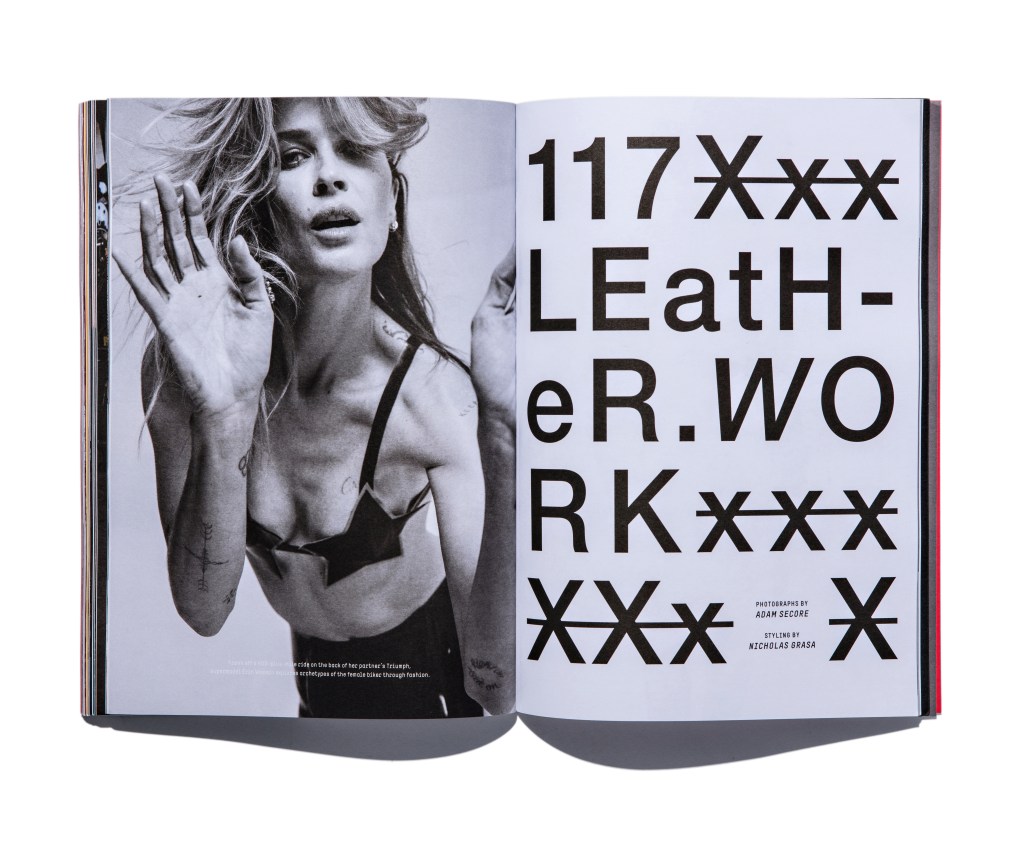 The first thing was to overhaul Easyriders’ social media, and it’s already back up to almost 27,000 followers on Instagram and Foster said it’s growing by a few hundred a day now. A new web site is set to launch next month. He also said his phone “has been ringing off the hook” lately with brands and companies (some “major”) calling to see how they may be able to work together, be it a collaboration or an advertising deal. He said the magazine still has major brand recognition, globally, too. He was just in Italy, London and Japan, all with motorcycle cultures of their own, and was excited how many people he met there who knew Easyriders and thought well of it.

Foster immediately decided to make the magazine a quarterly, upgrading everything from the photos and styling (his wife Vanessa is the creative director) to the paper stock and printing, and create a sense of scarcity with distribution. He printed 10,000 copies for the first 140-page issue (with no advertising pages), featuring actor Norman Reedus on the cover and a big spread with Erin Wasson inside. It sold out online in three days, Foster said. The magazine previously printed 600,000 copies a month. But his goal isn’t to merely operate a niche quarterly magazine for the fun of it.

Foster sees significant business potential in licensing the Easyriders name as well as the earlier art that appeared in the magazine, l like that of the late artist David Mann, who painted on the biker lifestyle. Foster is already looking at licensing Mann’s work for socks and underwear and is thinking about other brands like Vans, a popular shoe for West Coast riders. And Easyriders new chief executive officer is Charles Perez, a veteran apparel manufacturer in L.A.

There’s potential in an events business and Foster has hired Chris Breed, an L.A. restaurateur and consultant known for the Roxbury and Pig & Whistle. Easyriders is looking to host six events this year, which Foster foresees as a kind of “biker Coachella,” offering a mix of camping, riding and music performances.

If that wasn’t enough for a company that’s only a few months into new ownership, Foster, who seems naturally excitable, is already looking at TV deals for the brand. And more acquisitions of troubled but quality assets are likely, although Foster is not looking in the apparel space.

“This is just the start,” he said. “I’m building a really boutique company that can reposition or reset some beloved brands.”