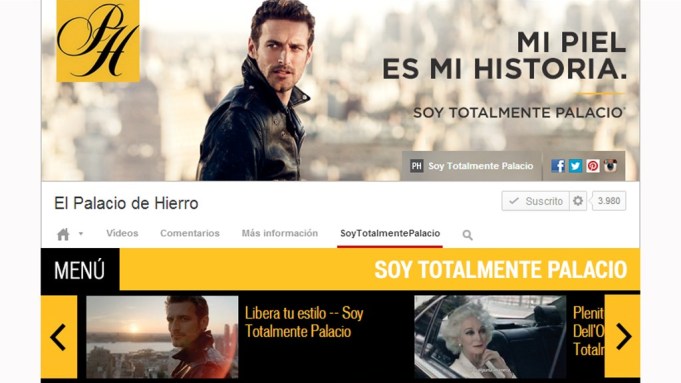 El Palacio de Hierro is gearing up for a significant e-commerce launch in a few weeks’ time.

The retailer might not be getting the advantage of being first on the scene, but by coming in a bit later, it can implement some best practices like live customer service functionalities and the welding of online and offline programs.

Darío Okrent, El Palacio’s e-commerce director, maintains that although e-commerce sales are “not significant” right now, this will change.

“For department stores in Europe, e-commerce is 6 to 7 percent [of sales], and in the U.S. it’s about 15 to 20 percent,” Okrent said, noting that online sales will make up about 7 percent of overall business at El Palacio in four to five years.

“We’re going to develop the site, [and it] will have more features, [including] interactive propositions for customers. This is a very omnichannel-oriented portal and strategy,” Okrent said. “We have to innovate to stay close to the customers, and for this age, the omnichannel and the consumer experience are fundamental for us.”

“Our focus is trying to be omnichannel,” Silis said. “We’re searching for that holy grail.”

Building the new digital flagship has been in the works for a year, with the department store partnering with New York and London-based digital creative agency Pod1 on the redesign.

Pod1 founder and chief executive officer Fadi Shuman said his team started from scratch, rather than enhancing or giving a facelift to an existing platform.

“We benchmarked Neiman Marcus and Harrods to see what they did online and literally created a checklist. Creatively, the approach was a high-end luxury destination, all about using their content and photographs,” Shuman said. “In the U.S. or Europe, most brands have built their global flagships online already, but this is not the case in Mexico.”

He added that one of the most important functions of the site is order fulfillment. In Mexico, where Shuman said it’s typical for e-commerce deliveries to take up to 45 days to arrive, all orders placed on El Palacio’s site are guaranteed to arrive within five days anywhere in the country.

To complement next month’s e-commerce launch, there will be efforts in-house to increase the team with a content curator who monitors metrics and client services associates.

Silis said the company has made a concerted effort in the past 18 months to firmly establish engagement with fans across the social channels. In this time, Facebook fans leaped from 180,000 to more than 1.6 million, while Twitter followers escalated from 10,000 to more than 230,000.

On El Palacio’s YouTube page, it’s common for a video to get more than a million views. A video posted on Aug. 25 containing the retailer’s slogan “Soy Totalmente Palacio” (“I am totally Palacio”) has already received in excess of 3.4 million views.

But in Mexico, where digital marketing is still in its early stages, according to Silis, it’s an especially effective way to connect with Millennials.

“We have just made the biggest database for El Palacio, with more than 1.6 million liking us [on Facebook],” Silis said. “It’s the biggest database that the store has, bigger than credit cards, e-commerce and the newsletter that we have. This is an opportunity to engage with our customers.”

New York University’s think tank Luxury Lab, or L2, has been consulting with El Palacio on its digital initiatives. According to Maureen Mullen, L2’s director of research and advisory, El Palacio has the ability to become the aspirational destination online for luxury brands in Mexico. Right now, a search on google.mx or other local search engines reveals that luxury brands are most purchased by gray market discounters — and if one considers official distribution partners, there is potential for more aspirational places for these brands to live, she said.

“How the brand is positioned in the marketplace makes it overwhelmingly one of the more innovative companies in retail, from store concept to brands to the customers to which they cater,” Mullen said. “The next step of that evolution is moving online, and the opportunity here for a retailer like El Palacio is to own the space in the Mexican market.”

Total e-commerce penetration in Mexico is 0.5 to 1 percent of total retail sales — with one-third to one-half of these sales coming from foreign retailers.

She draws a comparison to Dafiti — a two-and-a-half-year-old online luxury retailer in Brazil that has begun to export to the rest of Latin America, including Mexico — and notes that with El Palacio’s future efforts in the sector, it can “jump in and claim that [same] space for Mexico.”