The model-turned-blogger-turned-fashion-editor’s latest project is a clothing line with the brand. 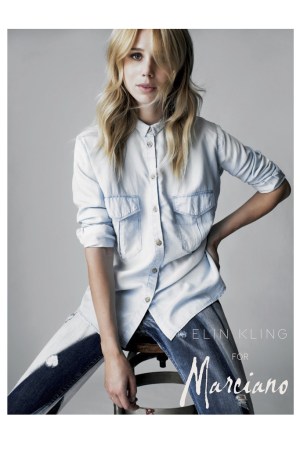 Model-turned-blogger-turned-fashion-editor Elin Kling’s latest project is a clothing line with Marciano. Called Elin Kling for Marciano, it will launch online Oct. 22 and hit stores worldwide Nov. 1. The 34-piece collection retails from $58 for a T-shirt to $898 for leather pants, and is Kling’s second design project (her first was with H&M in 2011). The line is based on her personal style, which Kling calls “typical Scandanavian,” even though she has lived in New York for the past year and a half. Kling talked to WWD about how she keeps it fresh with five-year-old blog, Style by Kling (on the Now Manifest platform, which is owned by WWD parent Fairchild Fashion Media), fashion week and the print magazine, Style By, that she launched last year:

WWD: Describe the collection in three sentences.
Elin Kling: I would say it’s wearable. It’s a collection 100 percent made by my instincts because I never had time to overthink anything — you know, to not actually think it through two or three of four times. I only had two days to do the first 14 sketches.

This story first appeared in the October 15, 2012 issue of WWD. Subscribe Today.

WWD: What’s your favorite piece?
E.K.: The maxidress. It goes right below the knees, and it has mesh detailing on the front, back and sides. It’s sophisticated.

WWD: Did your blog influence the design process?
E.K.: I’m not sure how much it influences the collection. The clothes are more about my personal style. It’s very wearable and I like effortless clothes.

WWD: What are you doing when you’re not blogging?
E.K.: I run my own paper magazine called Style By. It comes out eight times a year. It’s doing great. It’s my little baby. It has a staff of five, four of them in Sweden — so there’s a lot of Skype in my life. I am working on a new project, but I can’t share it yet.

WWD: How has your style evolved since becoming a blogger?
E.K.: I can look back in my archives from two weeks ago and think, “What was I wearing?” But I’ve always had this denim girl, minimalistic, typical Scandinavian style. Even if I try and add a little more fun to it, I’ve always had a simple style. I think my blog is popular because it’s an easy style to get inspired by and get your daily inspiration.

WWD: What’s your favorite part of the job?
E.K.: There is definitely a special feeling with producing my magazine. It takes so long, and it’s so much work and it’s such a good feeling when I get the new issue. Besides that, the blog has been important. I can always talk with my readers about the projects I’m working on, and I like that you can have a direct connection with readers.

WWD: Your least favorite?
E.K.: There isn’t. If there is something I don’t enjoy, I won’t do it. You have to enjoy what you do.

WWD: Is there a kind of project that you would never take on?
E.K.: Yes. I would never do anything that I don’t feel strongly about. I wouldn’t do something just for the money — unless it was a lot of money [laughs]. I’m very involved in everything I do. It might be tricky to work with me sometimes because I want to be involved in every step.

WWD: What is the direction personal style blogging is going?
E.K.: As an editor and a blogger, your followers are important. The celebrity generation isn’t that interesting anymore; you’re being inspired by your neighbor or the real woman. That’s how I try to think when I do my magazine — I want to keep the new generation online, but the challenge of a print magazine is figuring out how to get the new generation to stay with print as well. The new generation is asking for a person behind the content, they want to know who picked this and why.

WWD: How do you keep it fresh?
E.K.: I always try to do this — even if it’s a blog and the whole idea is to follow someone through their daily life and it’s as simple as that. This is something that always works, [and] I listen to what’s happening. When Instagram came out, I called my business partner and said, “What are we going to do on Instagram?” I was one of the first to put Instagram on my blog. It’s important to actually follow where the next step is and see how you can include that in your work.

WWD: What’s been your best purchase so far for the fall season?
E.K.: I bought this washed-out black sleeveless vest by Wayne at Barneys that you can also zip and wear it as a top. I’m [also] on the hunt for perfect ankle boots with a heel that I can walk in.

WWD: What were your top favorite shows from fashion week?
E.K: Phillip Lim, Balmain was very here and now, and Acne — I’ve really been following their journey and it’s so fun to see where they’re going.