The short movie marks the Swiss luxury watchmaker's collaboration with Louboutin for the anniversary of its classic Reverso watch.

By Joelle Diderich on May 3, 2016
View Slideshow 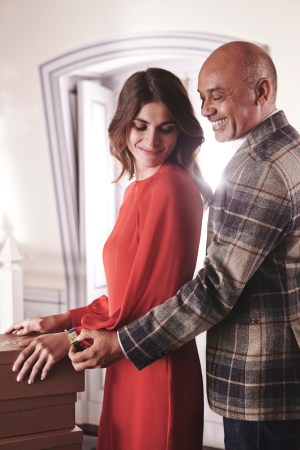 Jaeger-LeCoultre has unveiled a short film featuring Elisa Sednaoui to mark its collaboration with French shoe designer Christian Louboutin on the 85th anniversary of its classic Reverso watch. “Reverso by Christian Louboutin,” which can be viewed on the Swiss luxury watchmaker’s Web site, also features a cameo by the shoe supremo.

As part of the collaboration, initially revealed at the Salon International de la Haute Horlogerie fair in Geneva in January, Louboutin has designed seven dials and 10 straps for the Reverso Classic Duetto model, which is available in two sizes.

He has paired the sober Art Deco lines of the case with materials and colors that play with translucent and iridescent effects. One strap is made of transparent plastic, while others feature cut-out motifs and dégradé colors.

The reversible watch has a classical dial on the front, while the back – framed by two rows of diamonds on either side — features dials designed by Louboutin in colors including stone, scarab, nude and mother-of-pearl. Prices range from 4,650 euros to 40,000 euros, or $5,350 to $46,000 at current exchange rates.

“I understood that the Reverso’s iconic Art Deco lines and very specific format could be customized and changed, but never improved. The exciting part is not about enhancing the Reverso, but instead offering a different perception of it through inventive suggestions expressed on the space available for decoration and on the strap,” Louboutin said.

“For me personally, I have always loved miniature paintings and I think of these designs as a kind of miniature, just animated. It is actually refreshing to work within new limitations, it’s a real challenge, to see those thousands of detail can be translated on such a small surface,” he added.

Louboutin is the guest of honor of the Atelier Reverso initiative, a dedicated space that will be introduced in the watch brand’s stores in Paris, London, Geneva and Hong Kong this spring, allowing customers to personalize their watch by selecting its back dial.

The Atelier Reverso service will also become available in New York, Singapore, Beijing, Shanghai, Tokyo, São Paulo and Rome during the course of the year.