Festivities are to include an exhibit on the Champs-Elysées and a bash at Paris City Hall on Nov. 19. 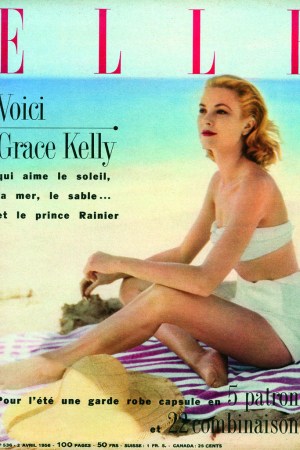 BIRTHDAY LADY: A year after she was named editorial director of French Elle, Françoise-Marie Santucci is prepping for the magazine’s 70th anniversary. Festivities are to include an exhibit on the Champs-Élysées and a bash at Paris City Hall on Nov. 19.

“It’s just like for yourself. You know; when you say that you won’t do anything and you end up celebrating,” she said with a laugh.

From Sept. 21 to Oct. 6., some 80 covers of French Elle over the last seven decades will be on public display on billboards on Paris’ famous avenue.

“When I started diving in the archives, I was blown away by their richness and all what they say about our times,” Santucci said.

Covers were selected around three major segments: fashion, celebrities and engagement. (Fashion covers include a recent one shot by Jean-Paul Goude featuring Nicolas Ghesquière; celebrities include the likes of Catherine Deneuve, Julia Roberts and Vanessa Paradis, and the more politically charged ones include the Charlie Hebdo cover featuring an illustration of a white dove.)

Elle France will then take over the Bazar de l’Hôtel de Ville Marais’ windows on Rue de Rivoli and Rue des Archives with montages of Elle covers, this time displayed by decades, from Oct. 19 to Nov. 3.

In addition, the magazine will party with younger sister Elle U.S. (owned by Hearst), which turns 30 this year. The bash is scheduled for Oct. 6 at U.S. Ambassador to France Jane Hartley’s residence in Paris.

Other initiatives include a book titled “Elle etait une fois” (a play on the French phrase for “Once upon a time”) published by Éditions du Chêne, set for release on Oct. 21. Meanwhile, visitors to Elle.fr can blow out the candles on a virtual birthday cake to win gifts from fashion houses. The official anniversary issue is to hit newsstands on Nov. 20.

Santucci, most recently editor in chief of Libération’s Next magazine and a former rock critic, has been hard at work since she took office. Reflecting on her past year, she cited the work done on renewing the fashion coverage. “We raised the level of our covers,” she said, praising the work of creative director Germain Chauveau (whom Santucci poached from Vogue Paris.)

She cited the cover featuring Carole Bouquet lensed by David Burton this summer where the actress appeared in a blouse at home on her island in Italy and the one featuring Marine Vacth coming out Friday. “She is dressed in a very simple way yet very stylish,” Santucci said.

There were more features on younger designers as well such as the Vetements team and the Courrèges duo.

Paid circulation of Elle in France was 339,539 from July 2014 to June 2015, according to France’s Audit Bureau, down 3.8 percent compared to the same period in 2013-2014. It fared slightly better than the rest of the women’s magazine market in France, which logged a 4.4 percent decrease in the same period. The last six months were positive, Santucci noted.