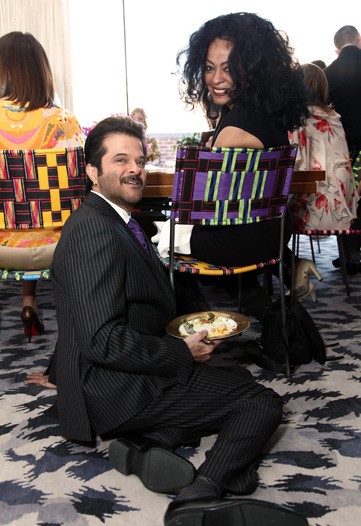 ELLE LUNCHES WITH DVF: It was so good it could have been a joke. Diana Ross, James Frey and a Philadelphia Eagles linebacker walk into a bar…except that the threesome walked into Diane von Furstenberg’s studio Wednesday afternoon for lunch (where the hardest drink on offer was white wine). Anil Kapoor of “Slumdog Millionaire”, First Lady outfitter Jason Wu, Veronica Webb, Eva Amurri, Roberta Myers, Joe Zee, Anne Slowey, Whitney Port, Olivia Palermo and a camera crew for “The City” were there, too, helping celebrate Jessica Alba (also in attendance) wearing DvF on the March cover of Elle. Such is a day in the life of von Furstenberg. “I’m an eclectic girl,” said the hostess, surveying the wide range of friends she’d gathered.

Ross and the designer have been lifelong confidantes, and Alba flew in for the occasion. The actress said that sometimes cover shoots can be trying. “Most stylists have their agendas, and they’ll put you in what they need to put you in — they have sponsors or whatever,” said Alba, who has her own fashion project in the works. Frey, the memoirist who was lauded then lashed by Oprah Winfrey, wasn’t quite sure how he got an invite to the intimate gathering beyond it simply landing in his e-mail that morning. “My wife’s into fashion. When I told her I was going to lunch at Diane von Furstenberg’s, she just said something along the lines of, ‘You’re so weird.’” When he arrived, Frey discovered he did have a friend there: DvF global image director Alixe Boyer, with whom he went to college.

As for the linebacker, meet Stewart Bradley, Elle’s newest intern. The Philadelphia Eagle started Tuesday in the fashion department and seemed at home among the stylish set, quickly rattling off the credits for his ensemble (PRPS jeans, Diesel shirt and PF Flyers kicks). But don’t assume he’s following in former New York Ranger/Vogue intern Sean Avery’s footsteps — even if one of his co-workers accidentally called him Sean. “I’m much nicer than Sean,” Bradley said.

LOOKING FOR THE SILVER LINING: Time Warner Inc. on Wednesday reported a $16 billion net loss for the fourth quarter that included noncash impairments of goodwill and intangible assets at Time Inc. and AOL. Advertising revenue at Time Inc. was down 20 percent, to $636 million, during the quarter, and total revenue fell 13 percent, to $1.3 billion. In all of 2008, online revenue increased $57 million in the publishing division, led by People.com, CNNMoney.com and Time.com. Jeff Bewkes, chief executive officer, had no guidance as to when advertising might pick up, but he had a bit of good news to report at Time Inc.: readership was up 4 percent for the year, although Bewkes didn’t provide details.

During a conference call Time Warner revealed that Google wants Time Warner to buy back its AOL stake or else take AOL public. The company is evaluating its options.

BRIDESHEAD REVISITED: Vera Wang, Mark Badgley, James Mischka, Rebecca Taylor, Douglas Hannant, Mark Ingram and Kenneth Pool were among the fashion types who helped Brides magazine celebrate its 75th anniversary last week at Top of the Rock. For editor in chief Millie Martini Bratten, the milestone was a reminder of the magazine’s pioneer status in the bridal magazine industry and its “enduring success.”

One of the evening’s adornments, a gigantic bed that had been slumbered in the previous night by Brides-selected newlyweds certainly wouldn’t have happened way back when. In fact, even in 2009 the Mile High Honeymoon Suite left several partygoers shaking their heads.

BOTTLE ROCKER: Belvedere collaborated with French graffiti artist Andre to launch its new flavor-infused vodka, Belvedere IX, this spring. But Andre, who owns several nightclubs in Paris and New York, including The Beatrice Inn, did more than appear in ads for the vodka and create “Mr. IX,” an electric pink graffiti character for the bottle — he helped formulate the product. Andre spent a year “sipping a lot of vodka” with Belvedere’s team to create a liquor infused with nine ingredients. Belvedere will promote IX mostly online through its own microsite and other social networking outlets. It will also advertise in niche fashion and lifestyle titles this spring with images shot by Terry Richardson, his third round of ads for the liquor company.