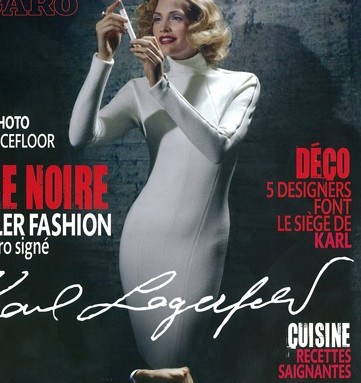 WORK SPACE: Elle staffers preparing for the magazine’s move to the Time Inc. building may want to exercise an especially editorial eye when it comes time to filling their moving crates. The magazine and its publisher, Hachette Filipacchi Media U.S., will trade Broadway for Sixth Avenue on Oct. 4, and word among staffers is the new space will only afford private offices to editor in chief Robbie Myers and creative director Joe Zee. An Elle spokeswoman said Thursday that details of the move are still being worked out. But the buzz squares with an interview then-chief executive officer Alain Lemarchand gave to Media Week last week, in which he praised a new, open floor plan as a way to encourage loyalty and cooperation among the staff. He even planned to give up his own office for a desk on the floor. Of course, on Tuesday Hachette revealed that Lemarchand would be leaving the U.S. operation for a senior management role with its French parent Lagardère Active, and that Steve Parr would take over as ceo. So is Parr as keen on an open floor plan? — Matthew Lynch

TAKE THAT, TIMES: On Saturday, the Wall Street Journal takes another step toward becoming a mainstream, general interest newspaper — and shoots another arrow in the direction of The New York Times — with the launch of its new weekend lifestyle section, Off Duty. Former Domino editor in chief Deborah Needleman heads up the effort, focusing on five main areas: fashion and style, design and decoration, food, travel and technology. The cover story, “Is L.L. Bean Driving The Runway?!” by Steve Garbarino, talks about how designers have taken cues and developed partnerships with classic brands such as Barbour and Stetson. “Designers, like Michael Bastian and Tom Ford, have become obsessed with heritage brands,” said Needleman. The 16-page section also covers Massimo Ferragamo’s Tuscan compound, which has become a sort of high-end timeshare for jet-setters. Initiation fees are a cool $1.6 million. The section isn’t purely a luxury play, though. There is a story on friendship bracelets, for example. “It will be a big mix,” she added. Malcolm Gladwell contributed a piece about “being one of those jerks” that write in their laptops in cafes. Gladwell also listed his favorite coffee shops (in case you were dying to know.)

With the section, which Needleman briefly considered naming Pleasures and Pastimes, (she was summarily overruled by colleagues) the editor is aiming to grow market share, and in particular, attract more women to the Journal. Advertisers for the first week of the new WSJ Weekend (the Saturday paper, not just Off Duty) include AOL, Westin, Montblanc, Lincoln and Dutton Press. Needleman’s other job at the paper, as editor of WSJ., will debut with the December issue. — Amy Wicks

The weekly magazine also features an article and portrait of Colette Rousseaux (founder of the eponymous Parisian boutique) and her daughter Sarah Lerfel, a Q&A between Lagerfeld and Ingrid Sischy and even a Lagerfeld cutout doll. Previously, Madame Figaro tapped Carla Bruni-Sarkozy to guest-edit an issue in March. — Emilie Marsh

Dee Dee Myers, former White House Press Secretary to President Bill Clinton, and a contributing editor to Vanity Fair, which cohosted the event, was the mistress of ceremonies. She poked fun at Rush Limbaugh in a story where a genie gave President Obama and Limbaugh two wishes while on a recent fishing trip. Obama asked to be 50 percent smarter to solve some of the country’s biggest problems, and Limbaugh asked to be 100 percent smarter and “puff, he made him a woman.”

“Anytime you can empower women and make fun of Rush Limbaugh in the same story,” is her kind of event, said Myers. Kristin Chenoweth, who got caught in Obama traffic in Midtown and just made it on time, posed for some photos with Myers, and said she’s been busy with “Promises Promises” and is about to start shooting a movie “Family Weekend,” as well as some episodes of “Glee.” Chenoweth said she’s always admired Myers and was happy to have the opportunity to talk to her. But, she added, “I wish I was as eloquent on political topics as I sing.” — Lisa Lockwood