Recession or not, for the many lesbian, gay, bisexual and transgender young people who receive help at the Hetrick-Martin Institute, it doesn't matter. 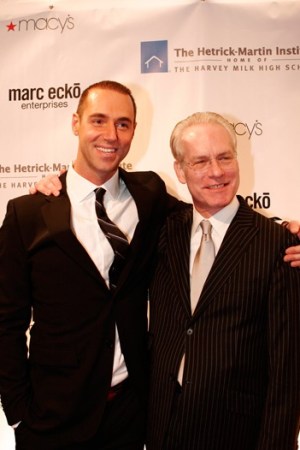 Recession or no recession, for the more than 1,000 lesbian, gay, bisexual, transgender and questioning young people who receive help at the Hetrick-Martin Institute, it doesn’t matter. “They continue to need a hot meal and a roof over their heads,” said Thomas Krever, executive director.

Krever was addressing a crowd of more than 700 at Cipriani on 42nd Street in Manhattan last week for the annual Emery Awards dinner, this year raising $1.2 million for HMI, which is the home of the Harvey Milk High School.

The event honored actress Mary-Louise Parker, who starred in “Longtime Companion,” one of the first movies to confront AIDS; Peter Wilson, who hosts HMI’s annual Hamptons event at his home; Judith Torres, who turned her life around at HMI, and the MAC AIDS Fund. The award is named after the late Dr. Emery S. Hetrick, who cofounded HMI in 1979 with the late Dr. A. Damien Martin.

Macy’s Inc., particularly Rob Smith, executive vice president and general merchandise manager of juniors, cosmetics and dresses for Macy’s East, has been a major supporter of HMI. Smith has chaired the event for three years and was recognized for his efforts. “I clearly remember the first time I took a tour of HMI and met with the youth. I was astounded by their courage,” he told the crowd. “HMI teaches us the right to be who we want to be and who we want to love.”

“The young people there are simply exceptional,” said Tim Gunn, chief creative officer of Liz Claiborne and mentor for “Project Runway,” who was host for the evening. “I marvel at their tenacity to just be. It causes me to reflect on my own teen years. I really didn’t know who I was. I knew who I wasn’t.”

Hetrick-Martin, located at 2 Astor Place in Manhattan, is a leading provider of social support and programming for at-risk lesbian, gay, bisexual, transgender and questioning youth, 12 to 21 years old throughout New York City and the metropolitan area.

Also last week, Jim Gold, chief executive officer of Bergdorf Goodman, hosted a dinner in the BG restaurant for 97 guests to support the World of Children and its 2008 honorees who are considered “change makers” since their work has improved the lives of children in desperate situations around the world. They include youngsters who are victims of sexual abuse surviving in Brazil’s notorious shantytowns or AIDS children living in Ethiopia. Since 1998, World of Children has awarded more than $2 million in cash grants to 70 change makers in 35 countries.

World of Children is supported by retail and design veterans, several of whom were at BG, including Kenneth Cole, Marvin Traub, Jerry Politzer, Michael Steinberg, Ron Klein, and Kay Isaacson-Leibowitz.

In the midst of the grim economy, “To come into a room like this, it’s fantastic and puts it in perspective,” Gold said. “This helps us get through some challenging times.”