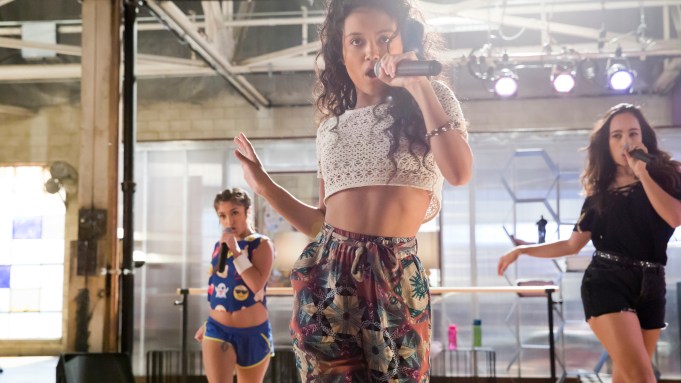 “My mom was like ‘you have to watch this show, you have to watch this show,” says 20 year-old actress Jamila Velazquez, of the Fox sensation “Empire.” Velazquez’s mother is not alone; few programs have exploded culturally quite like the record label soapy drama, launching into the second half of its second season on Wednesday. Velazquez went quickly from a binge-watching fan to Naomi Campbell follow-up. “I remember following Lee Daniels on Instagram,” she says of the show’s creator, “and being like ‘I could totally be on this show. Why haven’t I gotten an audition for anything?’”

Velazquez was born in the Bronx and moved to Rockland County at age 11. It’s where she calls home when not on set in Chicago. “Singing was my first love, it was everything — it still is everything,” she says. “When I was a baby, my mom couldn’t walk out of the house without making sure I had my little toy microphone.”

She attended a performing arts school and then was set to study acting in college, but dropped out to film “Empire,” which films in Chicago and records in Los Angeles. “We went to L.A. first to record ‘Mimosa’,” she says of the song she performs with costars Raquel Castro and Yani Marin. “They only guaranteed that I would be in four episodes. And I’ve been in every episode through the season finale.”

Her character, Laura, is the sweet, quiet singer who joins Cookie’s record label, and is the antidote to Hakeem’s usual quest of womanizing. “I love how they wrote Laura,” she says. “They’ve kept her really honest. She’s not willing to compromise for a man, or for money, and I love that. When I went into the first wardrobe fitting, I was like ‘oh my god, they’re really going to make me look like I’m 12 years old,’ but her growth was just fun, to discover more about her, and her relationship with Hakeem.”

That relationship will only continue, she teases, when the show returns. “Laura and Hakeem’s relationship is going to grow, and secrets are going to start coming out — lots of drama, some tragedy,” she says. “It’s going to be good.”

Laura is one of three singers in “Mirage à Trois,” a girl-group throwback to the Destiny’s Childs and TLCs of yesteryear. Velazquez’s own musical tastes divert a bit from the club ballads “Empire” is known for. “I do love hip-hop. I mean, I think I’ll always be a kind of natural hip-hop head because I’m from the Bronx,” she says. “And that’s what I grew up listening to. But I also listen to Alice in Chains, The Beatles, Ella Fitzgerald — everybody. I love kind of like a blues/rock sound. It’s more on the alternative side for sure.”

Much as her playlist departs from the tropes associated with a Latina actress from the Bronx, so do her character aspirations. “I want to play anything that shines Hispanics in a good light,” says the actress, who is of Puerto Rican, Dominican and Ecuadorian descent. “Like your average caucasian family in a movie — I want to be that.”

This June she’ll have a role on “Orange Is the New Black,” a part she booked immediately before landing “Empire.” But the “Empire” gig is sure to open some doors — something her mom, once again, is on the nose about. “My mom was like ‘get a publicist!’” she says. “‘We’ve got to take advantage.’”