by CHLOE and REI took one of the most inclusive, acts of artistry — drag — to advocate for the environment.

REI and Pattie Gonia team up in new campaign for Black Friday.

Last week, WWD held its inaugural Culture Conference to celebrate the power and influence of the LGBTQ community.

But other brands, such as outdoor apparel brand REI and vegan food chain by CHLOE, were joining arms with the community, to raise awareness in campaigns that debuted last week.

Wyn Wiley is a self-proclaimed “backcountry queen” on Instagram, presenting as Pattie Gonia when in drag, but both versions appeared in REI’s latest campaign in anticipation of Black Friday shopping.

For those unfamiliar with Pattie Gonia, she is an environmental advocate drag queen, raising awareness on issues such as plastics consumption, textile waste and other contributors to climate change.

Pattie Gonia even marched in the September global youth climate strike sporting white platform boots dotted with protest language and a sign that said, “Maybe if it was called ‘Father Nature,’ you’d give a s–t.”

In the “Dear Mother Nature” documentary, Wiley ventured to Hawaii to learn about the plastics crisis — speaking with scientists, nonprofit leaders, volunteers and working alongside sustainable fashion designer Angela Luna of the female-founded sustainable label ADIFF.

The three dress designs were later worn by Pattie Gonia in the “Everything We Lose” music video. 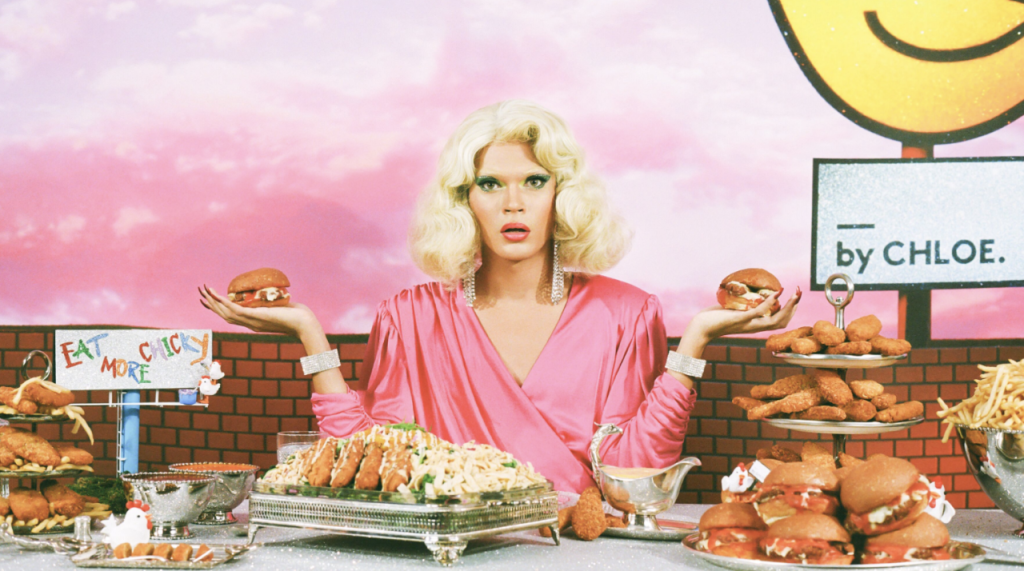 In the past, Wasser enlisted the world’s greatest competitive eater, Takeru Kobayashi (who is also friends with West Dakota), to help with the launch of by CHLOE’s “Carrot Dog.”

Taking inspiration from boundary-pushing drag culture and with the aim to “showcase our values as a company,” by CHLOE alludes to its other inspiration — Chick-fil-A, although not overtly stated the campaign touts “inclusivity” and #OpenOnSundays as a means to lean into the plant-based alternative. (Although, Wasser clarified it’s not an “us versus them” conversation, and she doesn’t want diners to feel that way about exploring vegan food either.)

“Four to five years ago, vegan food didn’t feel as inclusive,” Wasser said. by CHLOE has an interesting take, not just in its ad campaigns, but its educational stance as far as the food sustainability movement goes.

Aside from compostable and recyclable materials in-store, Wasser mentioned the addition of “fun coloring books” so diners can engage with sustainability in an “approachable way,” (picture an avocado drawing with a small stat on the bottom of the page). She also mentioned new products rolling out in the new year to continue the momentum.

“As a whole, food has become so serious — and as it should be. But we do it in a way that’s fun and interesting,” Wasser reiterated.