Erica Davies to Launch on QVC

Contemporary designer Erica Davies is ready for her close-up on QVC. 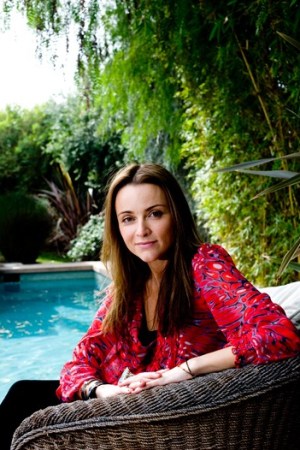 LOS ANGELES — Contemporary designer Erica Davies is ready for her close-up on QVC.

Davies, who designed Development for four years and closed her namesake line last year in the midst of the recession, has launched a lower-price label called Davies by Erica Davies on the TV shopping network.

Retailing from $44 to $59, the 12 summer pieces are designed as seasonal basics for a style-conscious woman’s wardrobe. There’s a feather-print Empire-waist maxidress to wear to a party; a sleeveless top whose beaded neckline glistens under a blazer; a stretch cotton ruched jacket, which can be thrown over leggings, and vintage-inspired jeans enhanced with side-slung pockets.

“It’s keeping the same concept of what you give a contemporary customer,” said the Welsh-born Davies, who studied at Central Saint Martins College of Art & Design and worked with Richard Tyler for a decade. “[The QVC shoppers] get more value for what they’re paying. They get forward design.”

Davies is the latest contemporary designer to make her QVC debut as part of the network’s New York Fashion Week-themed promotion, which is in its fourth season. The latest edition began Saturday and runs for five days.

In addition to Davies by Erica Davies, which launched Sunday, other first-time labels on QVC are Thuy by Thuy D., Gypsy by Mara Hoffman and Twist by Christian Francis Roth. They join QVC’s successful branded collaborations such as Logo by Lori Goldstein, Isaac Mizrahi Live, Rachel Zoe and Edition by Erin Fetherston.

Discussing how Davies fits into the group, Doug Howe, chief merchandising officer at QVC, based in Westchester, Pa., said: “She has obviously a beautiful aesthetic, gets a tremendous amount of response and has relevance in pop culture. We’re intrigued by her designs. She .nicely complements the other designers. We don’t have many designers that have a casual L.A. aesthetic — that is important.”

What’s important to Davies and other participating designers is QVC’s reach. It broadcasts to 96 million homes and generates more than $7 billion in annual revenues.

To appeal to such a broad market and maintain prices that are one-fifth of what Development sold for, Davies modified her techniques and materials. For instance, she replaced silk with polyester and halved the number of silk screens to fewer than 10 from 20. She offered a size 28 for Davies by Erica Davies after stopping at size 8 for Development, and eliminated shorts from her lineup after she learned they don’t sell well on QVC. She’s already created camisoles with removable necklaces and drawstring dresses among 25 pieces in her summer collection, which will be unveiled on QVC in June.

Davies, who recently moved to New York after living in Los Angeles for 14 years, hopes the exposure on QVC will help her find investors who can relaunch her namesake label. After working with QVC, she is even tempted to launch a moderately priced line along with a high-end business.

“Ten years ago, as a designer, you would never do it, but now you have to,” she said about the lower-price collaboration. “That’s the beauty of doing this. You can do the styles you want, and they’re modern and you can’t beat the price point.”