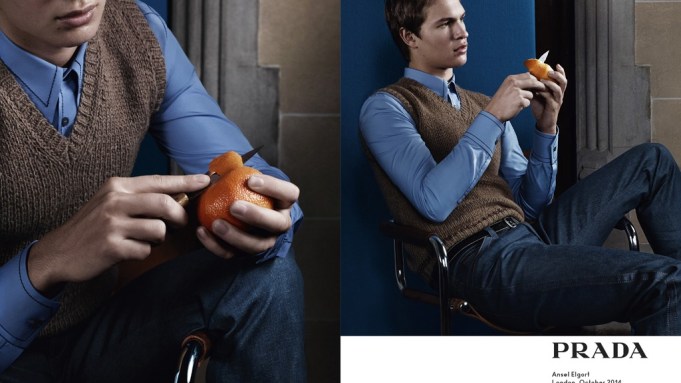 PRADA’S NEW CAST: Prada has enrolled a stellar cast for its men’s spring advertising campaign. Actors Ethan Hawke, Ansel Elgort, Jack O’Connell and Miles Teller appear in the images  taken by fashion photographer Craig McDean between New York and Los Angeles. The photos show both portraits and close-ups of the actors lensed in dynamic poses. For example, Hawke is caught cutting a picture with scissors, while Elgort is seen peeling  a tangerine with a sharp knife. In the shots – some black and white, some in bright contrasting tones, – the actors wear some of the most iconic pieces of Prada’s spring collection, which echoes the Seventies in the proportions and silhouettes. Hawke and Teller sport suits decorated with contrasting stitching, while Elgort and O’Connell don  more casual looks, including a graphic turtleneck, a knitted vest and denim pants. The advertising  campaign breaks in international publications this month.