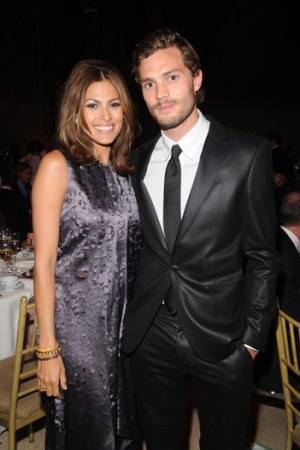 BACK AGAIN: Calvin Klein Jeans has tapped Eva Mendes and Jamie Dornan again for spring, following a much-talked-about fall campaign that showed the duo soaking wet, wearing skintight jeans. The campaign, shot by Steven Klein in New York, also will introduce a new product for men and women, Calvin Klein Jeans Body Whitewashed. The media buy hasn’t been finalized, but ads will roll out in spring magazines and outdoor sites around the world.

AXE FALLS HARD: Up to 130 of BusinessWeek’s editorial employees were told they would lose their jobs once Bloomberg takes ownership of the business weekly in December. Staffers were summoned by telephone one by one to the 46th floor of the McGraw-Hill building, a process that ran well into the afternoon, to receive the news. Once there, they came face-to-face with either Bloomberg staffers, who told people they would be retained, or McGraw-Hill executive editor Ellen Pollock and a human resources executive, who informed staffers they would be let go and the details of their packages. Some of those dismissed said a short explanation — “We’re doing something totally different with the magazine” — was given, but according to one source, the strategy seemed to be to “fire everyone except for management types who can put the magazine out,” until new editor in chief Josh Tyrangiel can bring his own people in. Bloomberg and McGraw-Hill declined to reveal the exact number of staffers let go, but press reports pegged it at about 130. Among those leaving the magazine are almost all of its columnists, including media columnist Jon Fine, who is on sabbatical; stock columnist Gene Marcial, and tech writer Steve Wilstrom. Bloomberg had earlier decided to drop the columns of Jack and Suzy Welch and CNBC’s Maria Bartiromo. Under the terms of Bloomberg’s purchase, McGraw-Hill will pay all the severance of laid-off employees.

However, she wasn’t shy about charting her ups and downs in the industry. Describing her spell selling collections on QVC, she said: “The whole thing was very tacky.” She also opined on everything from her choice of literature: “Mitteleuropa angst and Orhan Pamuk,” to how her business is surviving the economic crisis: “We are surfing the tsunami in a very pleasant way for the time being,” to her experience in being involved in the television show “The City”: “It was good for the business, but it’s not my favorite show.”

Von Furstenberg also regaled the society with tales of her Studio 54 days. One student asked how she came to meet Andy Warhol. “First of all, if you lived in New York at that time, there was no way you could not meet Andy Warhol. He was everywhere; he was like parsley.” After the talk, von Furstenberg said she “couldn’t refuse” the request to speak at Oxford. “It’s always inspiring to talk to people at the beginning of their life,” she said.

TOP GENTS: GQ’s Men of the Year party in Los Angeles always promises a slew of celebrities, and 2009 was no exception. A-listers crowded Los Angeles’ Chateau Marmont for the 14th annual celebration, including an Armani-clad Badass of the Year Clint Eastwood and guest Morgan Freeman, who held court inside with Laker all-star and Athlete of the Year Kobe Bryant, who wore Gucci. Eastwood’s secret to success? “Just outliving everyone,” he revealed. The magazine also placed Tom Ford, Zach Galifianakis and President Obama, honored as Leader of the Year, as among the best in class.

Ford admitted the company wasn’t too shabby. “I mean, come on, our President is one of the men of the year, so it’s nice to be included,” he said. Outdoors, Quentin Tarantino, Rose McGowan, Kate Bosworth, Olivia Wilde, Amanda Seyfried, January Jones, Gabrielle Union and Elizabeth Banks joined funnymen Galifianakis, Paul Rudd and hip-hop artist Drake, in Yves Saint Laurent. Neil Patrick Harris sipped martinis in a Dolce & Gabbana suit, McGowan wowed in a short silk Miu Miu dress and Jones wore Gucci, while Wilde wore a white Marchesa number that kept her a safe distance from the buffet tables. Palin family critic and babydaddy Levi Johnston, in a purple button-down shirt and charcoal vest, also made the rounds, with two imposing security guards at his side, a sight that amused more than a few guests. Zoe Saldana and Marley Shelton both took a turn around the soiree in Burberry, while Kevin Chen, chief executive officer of MEK denim, posed for a series of notable photos with an accommodating Ford, as well as Bryant and GQ publisher Peter Hunsinger.