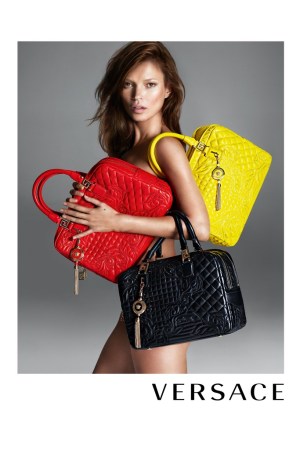 EVEN MORE OF MOSS: Kate Moss’ idea of punk is to bare all. In Versace’s fall advertising campaign, promoting its so-called “Vunk” collection, which referenced the house’s punk signatures, Moss appears nude except for three strategically placed Vanitas quilted leather handbags. The campaign is “stripped back to the raw power of the clothes and models. There’s no set, no distraction, just the provocation, glamour and attitude of our fashion,” said Donatella Versace. Saskia de Brauw, slightly more covered up, was also shot by Mert Alas and Marcus Piggott in London in early March for the women’s collection, while Travis Smith, Dominik Bauer and Matt Trethe, who is new to Versace, are the faces of the men’s collection. The photographers, Moss and creative director Giovanni Bianco are all returning from the spring campaign.