Fashion and Laughter at the White House Correspondents Dinner

The annual White House Correspondents’ Dinner offered the first chance for President Barack Obama to poke a bit of fun at himself on a major D.C. stage. 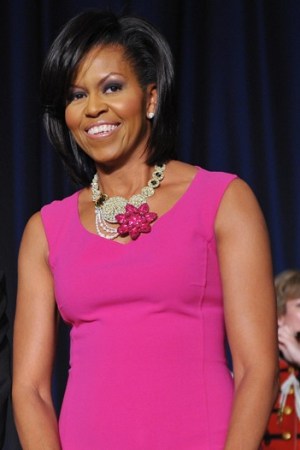 Hollywood, fashion, finance and politics flocked to Washington on Saturday night for the annual White House Correspondents’ Dinner, the first chance for President Barack Obama to poke a bit of fun at himself on a major D.C. stage. The 2,500 guests who attended the gala at the Washington Hilton were met with smiles, cameras, handshakes and bubbly chatter about attendees’ fashion choices. First Lady Michelle Obama opted for a magenta Michael Kors dress, and many female attendees followed the First Lady’s lead and wore bright colors for the evening.

But at least two members of the new administration stayed mum on their designer choices: White House Social Secretary Desirée Rogers, who wore a long pink gown, and senior adviser Valerie Jarrett, wearing a long, structured metallic dress. When asked several times about their sartorial choices, both women — who have rapidly become fashion plates among the Washington elite — deflected the question with pursed lips and coy stares.

New York City Mayor Michael Bloomberg succinctly summed up the night. “This event is a lot of nice people getting together, hopefully they’ll have a little bit to drink, say hello and make some new friends,” he said.

“The thing that I like so far is people aren’t shy,” said Rogers, who sat with Cole, Alicia Keys, Narciso Rodriguez and Kerry Washington at a table hosted by Glamour. “They’re coming up, they’re talking about things we’re doing at the White House, they’re introducing themselves, they’re taking pictures. Everyone seems to be really comfortable here. I like that part.”

In the crush in the Hilton hotel lobby, guests shuffled between cocktail parties in a crowded corridor that often left reporters shoulder-to-shoulder with celebrities ranging from the intelligent to the overwhelmingly good-looking. Overheard on the way to the ballroom: Look! “Gossip Girl” actors Chace Crawford and Ed Westwick! There’s Timothy Geithner! Oops, excuse me, Rahm Emanuel, but mind stepping aside while I get a picture of Kerry Washington? And is that Rick Schroder?

“It’s a very curious spirit here,” said Rodriguez, observing the buzzing ballroom. “D.C. is completely different in spirit from last year to this year, on so many levels, fashion being one of them that impacts us directly. It’s a beautiful place to be.”

During dinner, Cruise caused a commotion in the center of the ballroom, standing to chat and take photos with a lineup of fans — male and female — that ran 30 people deep. Cruise and Holmes sat at a table hosted by Vanity Fair.

Once Obama took the stage, his riffs on his fellow Democrats, Republicans and himself had guests in stitches.

On former Vice President Dick Cheney, who was not in attendance: “He is very busy working on his memoirs, tentatively titled, ‘How to Shoot Friends and Interrogate People.’” On Secretary of State Hillary Rodham Clinton on the closeness of their relationship: “The minute she got back from Mexico, she pulled me into a hug and said I should go down there myself.” On Emanuel, the White House Chief of Staff: “[Mother’s Day] is a tough holiday for Rahm Emanuel because he’s not used to saying the word ‘day’ after ‘mother.’” Even the First Lady received some slight ribbing: “She has helped to bridge the differences that have divided us for so long because no matter which party you belong to, we can all agree that Michelle has the right to bear arms.”

Obama was the warm-up act for comedienne Wanda Sykes, who let loose a few zingers on Washington’s elite that at times pushed the line of taste (which many attendees didn’t mind). Joking about the media’s love for Obama, she said, “You guys have been favorable towards the President. It’s funny to me that they never caught you smoking, but they always catch you with your shirt off. I know you’re into this transparency thing, but I don’t need to see your nipples.”

For Versace, who attended in 2008, this year “was much better. It was more relaxed and much more fun.” After dinner, guest opted for one of two big after parties: the high-energy party at the Corcoran Gallery of Art hosted by Capitol File, and the Vanity Fair/Bloomberg party at Residence of the French Ambassador Pierre Vimont.