What’s old is new: The oft-repeated refrain is a favorite of the fashion community, but perhaps nowhere is that motto more true than in collage, which has become a fashion-world favorite. 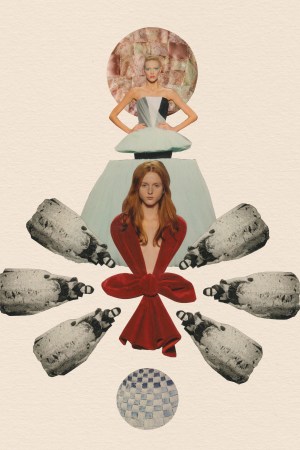 What’s old is new: The oft-repeated refrain is a favorite of the fashion community, but perhaps nowhere is that motto more true than in collage, which has again become a fashion-world favorite.

Loosely defined, collage is a combination of various different elements, so it’s fitting that designers and artists are increasingly turning to Instagram — that creative community melting pot — to not only find new collaborators, but to publish the fruits of their labors.

One of the latest iterations is from a collaboration commissioned by Viktor & Rolf.

During the month of July, Viktor & Rolf turned to London artist Adam Hale to create a series of six works that the designers published on their Instagram account, starting July 7, using the hashtag #collagecouture throughout the month.

“Every season, we translate the essence of our seasonal Haute Couture collection to the digital sphere. We like to get the creative Instagram community involved in our work because there is so much creativity flowing,” the designers said. “The collection ponders over the past, where elements from past iconic collections are carefully scrutinized before being lovingly reworked into a new order.”

The designers, who also use Twitter and Facebook, said that they particularly approach Instagram, which they began using three years ago to show their work, as “an artistic medium for expression. For us, it is a platform that we often like to explore for visual inspiration.”

In this case, they said, Hale looked at “the past in a new light, creating a stepping stone for the new.” Hale had access to the collection before it debuted, from which he was able to produce abstract compositions, using mementos from past Viktor & Rolf collections.

Hale said that the idea was to kick-start a digital initiative that revolved around the art of collage in which Viktor & Rolf’s 155,000 Instagram followers were urged to create their own artwork based on Viktor & Rolf’s body of work.

“There’s been a really positive response to the work,” Hale said. He added that for his 119,000 followers, the conceptual designs were a refreshing departure from his usual content. Hale said that before working with the designers, he knew little of couture, but that his work often appealed to those in the fashion industry. He has also worked with Christian Louboutin, Adidas, W, and Elle, and is working on a project with Mercedes-Benz Fashion Week.

“Collage is such a broad term and in its simplest form can be applied to almost anything creative,” Hale said. “To me, it’s the recycling of particular parts of a ‘previous generation’ in order to build something new and original. What interests me most at the intersection of fashion and design and collage is that it never ends; creativity breeds creativity.”

Brands such as Courreges, Stella McCartney and Gucci have also increasingly turned to Instagram as a platform to publish work created by artists and inspired by the brand.

For its #GucciGram project, Gucci invited artists to create work that featured its patterns and designs. In addition to publishing the works on Instagram, on which it has 9.7 million followers, it shares both commissioned and uncommissioned works on a micro site, at gucci.com/gucci-gram. And last week, it published the work of visual and video artists who created pieces inspired by Gucci’s ace sneaker using the hashtag #24HourAce. They were also published on the microsite gucci.com/24hourace.

The introduction to the #GucciGram project, written by Brooklyn-based technology and culture writer Kyle Chayka, states that the Internet has “changed the way we interact with images. It can always be changed, altered, remixed and reimagined with the help of technology…We don’t need to wait to go to a museum anymore. We just open Instagram on our smartphones and have immediate, intimate access to brilliant photographers and artists around the world who post their work as soon as they create it.”

In the introduction to the #24HourAce project, Gucci designer Alessandro Michele endorses digital discovery and its encouragement of self-expression: “Creativity is often born and finds its voice in digital media, a vital source of visual culture.”