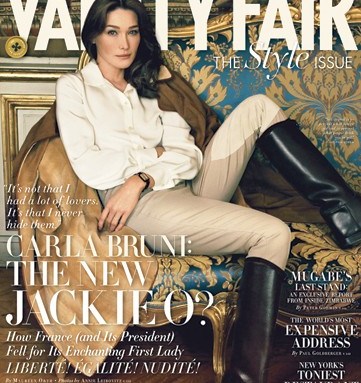 FASHION MAGAZINES BEAR BRUNT OF ECONOMIC MELTDOWN: It was an ugly 2008 for the entire magazine industry, and the major fashion and luxury titles couldn’t escape the blows of the broader economic decline. By the end of the third quarter, magazine ad pages had declined 10 percent across the industry, reported Publishers Information Bureau in October, as major ad categories like pharmaceutical, automotive, technology and beauty reduced spending significantly compared to 2007. The declines continued as Lehman Brothers and Bear Stearns collapsed, Washington Mutual was swallowed whole, and the federal government granted a $700 billion bailout to help rescue the U.S. financial system. With an economy in disarray and consumer confidence on the wane, advertisers reined in ad budgets across all media, with print hit especially hard.

According to publishers’ estimates to be filed to PIB, fashion magazines on the whole reported double-digit drops through 2008. For most, the declines represented cyclical changes in the economy. Others had more specific challenges — for example, Condé Nast’s fashion magazines carried fewer pages in December because of the company’s decision to forego the marketing program Movies Rocks. Vanity Fair lost 84 pages as a result of the cancellation of the supplement. The magazine for the entire year had 1,917 ad pages, or 15.3 percent fewer than in 2007, suffering also from the writers’ strike earlier this year, which reduced the amount of promotional spending around new movies and television shows. Other Condé Nast titles hit by double-digit declines included Glamour (down 12.4 percent); W (12.7 percent), Lucky (11.3), Teen Vogue (10.2) and GQ (11.5). Vogue’s pages declined nearly 10 percent, coming off of a record-breaking year in 2007 in ad pages and revenue under publisher Tom Florio.

But some titles posted even larger losses. Fortysomething women’s lifestyle magazine More lost 30 percent of its ad pages as pharmaceutical, packaged goods and companies such as Talbots, Liz Claiborne and Macy’s cut back spending. Real Simple reported an 18 percent ad page decline, to 1,705, after several years of strong growth at the Time Inc. title. O, The Oprah Magazine, which recently folded its home spin-off, O at Home, back into the main title, lost 14 percent of its ad pages. Even Esquire, which celebrated its 75th anniversary this year and created a media splash with a special “electronic ink” cover for the October issue, couldn’t drum up the same excitement for advertisers — pages declined 14 percent, to 991. Some magazines couldn’t survive the downturn in the economy — Hearst Magazines folded Cosmogirl in October and Condé Nast reduced Men’s Vogue to a twice annual title from 10 times a year.

Among magazines that posted more promising results (but whose gains might have come at the expense of margins), Elle and Men’s Journal reported 3 percent increases in ad pages, while Harper’s Bazaar saw relatively flat results (the magazine spun off a special issue in September, Runway Report, which also brought a slight boost to paging). Over at Rodale, newer titles Women’s Health and Best Life continued to show strong gains.

READERS AND THEIR INCOMES: Hearst Magazines’ Town & Country and Marie Claire scored the highest increases in household income among women for fashion and beauty titles — up 21 percent to $65,018 and 18.6 percent to $78,042, respectively, according to Mediamark Research & Intelligence’s fall 2008 report. The spring Mediamark report had Marie Claire up 22 percent to $72,832. Susan Plagemann, vice president and publisher, credits the consistency of the magazine’s editorial product with its continued climb in household income. “That’s how you build strength in the audience,” she noted, adding this information will go straight into the title’s marketing materials and a news flash to advertisers. She also said luxury advertisers such as Armani, Tiffany and Dolce & Gabbana have all increased their advertising in the magazine during the past year.

THE ELECTION DISSECTION GOES ON, AND ON, AND…: Hillary Clinton and Sarah Palin are no longer campaigning, but former vice presidential candidate Geraldine Ferraro isn’t done decrying media sexism. At a panel on “Gender, Politics and Media in the 2008 Election” hosted by New York Women in Communications on Thursday, Ferraro called on journalists and executives present to do more to fight sexism. And she named names: “Tim Russert was the worst on [sexism],” she said. “I wish that he were still here for many reasons, one of which is I would beat him up a little” over his handling of the Democratic primary debate. She said she’d severed her 30-year friendship with Russert during the primaries after some heated e-mail exchanges on the topic.

Ferraro, who drew criticism during the campaign for saying Barack Obama’s race was an asset to his nomination, began to compare racism and sexism in the media before moderator Carol Jenkins, president of the Women’s Media Center, stopped her. “Geraldine, don’t go too far on this,” saying she had gone on television to defend Ferraro back then.

There were silver linings, panelists said. Jenkins pointed out that the prominence of Rachel Maddow, Campbell Brown and Katie Couric during the election season represented a step forward for women in the media. Marie Wilson, president of the White House Project, noted Clinton and Palin’s candidacies had meant more female commentators on Sunday news shows. “It was like, wow, this is usually ‘Meet the Men,’” she said. And Arianna Huffington said the campaign had “spelled the end of Karl Rove politics. The main reason it didn’t work was the Internet.” She argued that while television was compelled to give time to John McCain surrogates saying that, for example, Palin had opposed the “bridge to nowhere,” online venues had repeatedly challenged the assertion until the campaign quit using it.

The night before, at an Executive Women in Fashion event at FIT, Huffington also gave the Internet credit for electing Obama, saying, he “used the power of the Internet. Were it not for the Internet, he would not be president.”

Huffington said the media had a responsibility to not simply repeat the anonymous ex-McCain staffer leaks that made Palin look worse. But, she added, “Let’s not forget the reality of Sarah Palin. She is an arrogant know-nothing.…She’s someone that we as women don’t have to defend just because she’s a woman.”

Still, plenty of women disagree, as More editor in chief Lesley Jane Seymour learned when she got angry reader mail for putting Michelle Obama on the cover and not Palin. (The magazine had in fact been talking to Palin when she was simply a rising star among governors, only to see its access yanked when she was named a candidate for vice president).

CAN YOU GUESS THE PERSON OF THE YEAR?: Even if Barack Obama is considered a shoo-in for Time magazine’s Person of the Year, at least a lunch panel gathered to discuss the possibilities got some zingers out of the experience. NBC anchor Brian Williams and “Saturday Night Live” head writer Seth Meyers tried to out-quip each other, and Meyers took a good-natured shot at his NBC colleague when Time editor Rick Stengel referred to actor John Slattery as the panel’s “heartthrob.” Said Meyers, “The only thing I enjoyed about your heartthrob comment is that it hurt Williams more than me.” On last year’s honoree, Meyers asked, “Does Putin know it’s not a lifetime appointment?” He also proclaimed Sarah Palin “certainly the comedy writer’s person of the year,” adding he’d opt for Tina Fey as a runner-up person of the year, “just ’cause that would be the best chance I’d be mentioned in the article. And it is about that for me.” Williams alternated between grave statements on the economy and ribbing Stengel for the Mylar mirror that illustrated 2006’s person of the year, “You.” He said the country needed a little less “You” after the turn the economy’s taken. In that vein, fellow panelists Elizabeth Edwards and Suze Orman were less chipper, particularly the latter, who said the American consumer deserved to be recognized — for bringing down the world economy. “Shame on us,” Orman said. Meyers more or less agreed: “What I would want to know is, is [Obama] going to give this message that we have to start paying for what’s happened? And people hate paying. Being in television, it’s amazing how many people say to me, ‘Oh, I hate commercials.’ That’s paying…that was the deal, you watch commercials to pay for TV.”

PAM A WESTWOOD FAN?: Those rumors that Pamela Anderson might feature in Vivienne Westwood’s spring 2009 ad campaign could be true. According to sources, Anderson has shot the campaign, though the images aren’t confirmed. It’s thought that as with past Westwood campaigns, images of the designer and her husband, Andreas Kronthaler, have also been shot for the ads. A spokesman for Westwood could not be reached for comment Thursday. Campaign or not, Anderson has already generated plenty of publicity for Westwood. The actress caused a stir at the designer’s Red Label show in London in September when she sat front row in a revealing, corseted gold Westwood gown, with a strange white-masked companion in tow.