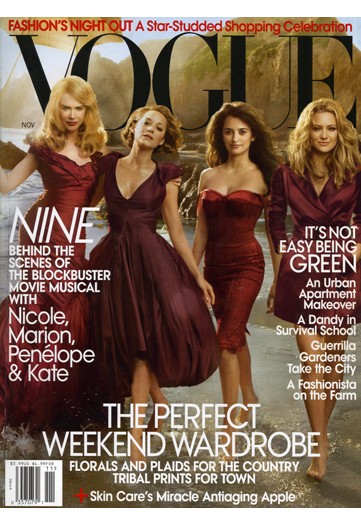 Fashion magazines’ full-year figures for ad pages aren’t as full-figured as in the past — but publishers hope their titles will begin adding back some weight as 2010 progresses.

Of the fashion magazines surveyed by WWD, most suffered jaw-clenching declines in paging in 2009, ranging from the midteens to nearly 50 percent. In all, the category lost about a quarter of its pages this year, with those heavily weighted toward luxury seeing the largest losses.

In 2009, publishers faced unprecedented challenges — the Dow cratered at 6,500, same-store sales across retailers tanked, the auto industry shrank like a raisin and banks tightened their belts on issuing credit to consumers. In addition, brands looked more to online advertising, with some major companies cutting their print spending to instead market themselves through their Facebook and Twitter accounts or Web sites. As a result, spending fell 1.7 percent across all media through the third quarter, according to media research firm TNS Media Intelligence.

Publishers woke up to a new reality. “When nothing is broken, we stick to our current ways and standards,” said Robin Steinberg, MediaVest’s senior vice president, director of print investment and activation. “This forced publishers to evolve their approach, processes and mind-set faster than ever before. Are we there yet? No. Do I believe there’s room for more flexibility and creating different models and standards? Yes — but we’re moving in the right direction and the right conversations are being had.”

Of the lessons learned from 2009, Vogue senior vice president and publishing director Tom Florio argued holding true to brand identity helped Vogue maintain share. “I learned how important it is to lead the market in terms of editorial standpoint, versus heavily discount and use our editors to sell ad pages. What we saw happen this year, which we haven’t seen in a while, is the discounts were approaching 70 percent. Some of the deals that were being done were just crazy,” said Florio in a swipe at the competition’s wheeling and dealing.

Vogue lost a third of its paging this year, or about 900 pages overall, despite the buzz surrounding the brand through the documentary “The September Issue” and the Sept. 10 event Fashion’s Night Out, which Vogue editor in chief Anna Wintour helped create. “Smart, powerful women still care about the way they present themselves to the world. That was our message, and we led with that instead of giving away edit credits and pages. We needed to change the mind of women to make it fun to shop again,” said Florio.

With brands clutching tightly to their marketing dollars, some publishers deployed combat-worthy strategies to maintain business, be it through incentives, marketing programs or in-store promotions.

Other titles diversified their advertising mix to help boost pages outside of core categories — such as personal care products, food, automotive or pharmaceutical — to counterbalance the loss of business from the luxury and fashion sectors. “Just because business has been here for 10 years doesn’t mean that it will be here tomorrow,” said Bill Wackermann, Glamour’s senior vice president and publishing director. “It’s a whole new ball game, a whole reboot of how we do business.”

Of the few that saw positive gains, People Stylewatch grew pages 23 percent to 624, but the title is relatively new, having begun publishing on a monthly basis in 2007. And while More added 11 more pages in 2009 than last year, at 918, that’s still 30 percent fewer than the 1,300 the magazine carried in 2007. More vice president and publisher Brenda Saget Darling found that “marketers are starting to have a different conversation. They can’t focus on the aspirational customer but they are looking for readers and consumers who have money to spend.” More’s fortysomething professional readership was an attractive target for new advertisers such as Cadillac, Mercedes-Benz, Ralph Lauren, Coach and Giorgio Armani Fragrance, Darling added.

Moving into 2010, publishers are breathing somewhat easier as the economy shows faint signs of life. Publishers point to beauty, automotive and food categories as sectors that are holding steady. Some December issues are already showing increases, among them Marie Claire, In Style, Cosmopolitan, Glamour and Women’s Health.

Lucky’s Gina Sanders said the first quarter is looking positive for the magazine, with January being the second-largest issue in its history for that month. Allure’s January issue will be up five pages over last year’s, with 45, and In Style’s Connie Anne Phillips said 2010 “is encouraging” and that she’s already seeing a bump in business in the January issue. Hearst Magazines executive vice president, chief marketing officer and publishing director Michael Clinton focused the company’s 2009 sales meeting on resiliency and flexibility as the company goes into 2010 with seven of its magazines in January posting ad page gains. And Florio said even if Vogue’s revenues are flat in 2010, “our profits will be up substantially, almost double, on the same revenues of 2009,” helped in part by having a more cost-efficient operating structure after Condé Nast dictated all the company’s titles cut their operating budgets.

Such comparisons are against soft numbers in 2008 as the recession started to take hold across print. But Sanders argued the gains are a sign advertising dollars are percolating. “In black-and-white terms, is the faucet on or off? It’s on,” she said. “It might be a trickle, but it’s on.”