The tables were reversed at the opening of Bruce Weber's "Whirligig" show at the Fahey/Klein Gallery in Los Angeles Thursday night. 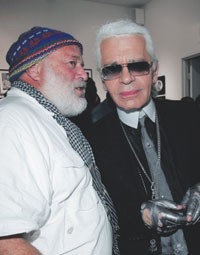 CLICK CLICK CLUB: The tables were reversed at the opening of Bruce Weber‘s “Whirligig” show at the Fahey/Klein Gallery in Los Angeles Thursday night, with fewer hired photographers than the bold-faced ones who turned out to fete their fellow lensman — among them Mario Sorrenti, Craig McDean, Peggy Sirota (who just shot the Man of the Year issue for GQ, whose creative director, Jim Moore, flew in just for the party), Paul Jasmine, David Sims and Karl Lagerfeld, who clicked away on his tiny silver digital camera. It wasn’t the only photo moment of the week for Lagerfeld, who drew quite a crowd in front of the Chanel store on Rodeo Drive the day before as he shot for the next ad campaign. But at the gallery and after-party at Miauhaus studios up the road, the focus was on Weber. Copies of his new “Blood, Sweat and Tears, or How I Stopped Worrying and Learned to Love Fashion” (teNeues) were long sold out before Nicolas Ghesquière, Michael Ovitz and Mary-Kate Olsen arrived. “I adore working with Bruce because he just gets a party going and then shoots life as it happens,” purred Cheryl Tiegs. The scene was model heavy, too, with many Weber boys as well as Daria Werbowy, Trish Goff and Cordula Reyer. Mischa Barton, for one, aimed to be next. “I’m such a big fan,” she gushed to Weber, who just as enthusiastically shot back, “I want to shoot you. Call me.”

VICTORIA’S SECRET PREVIEW: Victoria’s Secret will be pulling out all the stops for its Nov. 9 fashion show, which will be taped in New York City. The show will reportedly open with jazz musician Chris Botti, whose new CD was launched in the U.S. last week and is already number one on the jazz charts with over 45,000 units sold. Latin pop idol Ricky Martin is expected to close the show, which will feature Victoria’s Secret’s traditional parade of sex-charged lingerie on supermodels, according to sources. The multimillion-dollar fashion and entertainment extravaganza will appear on CBS in early December and is internationally syndicated. Seal is expected to be a guest, and Heidi Klum will be appearing for the first time for the company since having a baby. Victoria’s Secret officials could not be reached.