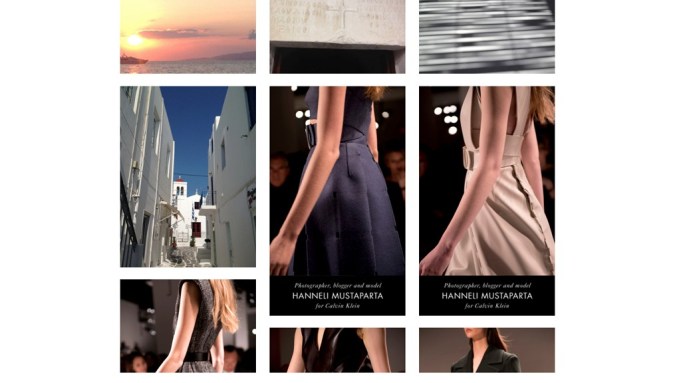 As designers, press, buyers and the assorted hangers-on gear up for another round of the fashion merry-go-round, they are focusing as much attention on cyberspace as they are on the action on the runways. Forget just seeing the clothes, reviewing them and perhaps buying them — now everyone has to tweet, Instagram, pin and even YouTube.

And all that action will increase exponentially this time round, turning the string of shows and parties into a sort of concert that lives online.

For brands, having a broader, more digitally inclusive take on fashion week is now as much a necessity as having models for the shows — which in many cases are more about brand building than the clothes anyway.

“Can social media save fashion week?” he asked. “Look what happened to Fashion’s Night Out. It felt great, everyone thought it was really cool, but someone probably did some math around it and said, ‘This isn’t worth it,’ and everyone is coming to this conclusion around fashion week in general.”

The growth of digital has already changed how shows are presented worldwide — from making them greater fashion spectacles to, now, making them more intimate and selective.

For instance, Oscar de la Renta said last week that he would dramatically cut the guest list for his show.

“When you do megashows, it loses the reason of why we’re showing,” de la Renta told WWD, quickly adding that interested parties can “see the show on the Internet 20 minutes later.”

Instead of hosting two more-than-300-seat shows, the designer will hold just one show with 350 seats, eliminating significant cost and “huge crowds of people with no direct connection to the clothes.”

While there is immense hype about brands’ social media experiments, it’s unclear if their fashion week digital efforts help them acquire new followers — or, more importantly, nudge consumers toward buying the clothes.

Take Tumblr’s initiative for New York Fashion Week, which paired 20 of its top bloggers with designers as part of a mentorship program.

The bloggers spent time with their designated designers in the days leading up to fashion week — Marc Jacobs partnered with David Urbanke, Oscar de la Renta with Miguel Yatco, Pamela Love with Giza Lagarce, Philip Crangi with Ashley Simko and Donna Karan with Jamie Beck, among others — collecting content to post during the week. On Thursday, all content will be featured at the Tumblr Fashion Photo Showcase, an exhibition at Milk Studios.

As designers tell their fashion stories on the runway, their social media crews will be taking that theme and combining it with tweets and posts as they appear in the digital ether, mixing and matching to get their broader message out.

Mike McGinley, cofounder of Citizen Net and one of Facebook’s first advisers, said brands need to be ready during big global events such as fashion week to amplify their message and provide quality content, swiftly broadcasting it to the masses.

“Twitter is real time, it’s live. At the actual runway events — or at a party — you will want to tweet about it because Twitter spins really fast,” McGinley said. “That’s the best way to get your message out to the ecosystem.” He added that Vine and Instagram are taking over with respect to “short, really cool video clips,” and he finds Pinterest and Tumblr the best mediums for sharing still photography.

Then there’s Facebook. McGinley, who worked with Mark Zuckerberg, Sean Parker and a “few engineers” when the platform was just a team of 12 on Emerson Street in Palo Alto, Calif., believes the site remains the foundation of the entire social sphere online.

“Facebook is the place where you message all of that stuff to get that message out. You saw something cool on Pinterest, or a video on Instagram — and you want to link to that because you want to get it out there to that social graph. It’s the foundation of all those platforms — to message and connect,” McGinley said.

One of Instagram’s several initiatives to help fashion bring the outside in is called “A Day in the Life.” Rachel Zoe, Michael Kors, Rebecca Minkoff, Coco Rocha, Karolina Kurkova, Olivier Theyskens, The Sartorialist’s Scott Schuman and more will upload photos and videos from their day — with an emphasis on delivering behind-the-scenes shots — using the dedicated #dayinthelife hashtag.

Another interactive feature will live in the lobby of Lincoln Center, comprised of a display screen made up of six 40-inch Samsung monitors. Tiled, real-time Instagram images will populate the screens from fashion accounts, as well as images with hashtags like #NYFW, #MBFW (Mercedes Benz Fashion Week), #dayinthelife and #madeFW. People will also be able to Instagram “selfies” (photographs taken of oneself), and hashtag them with #MBFW for them to appear on-screen.

“We aren’t trying to redefine the way Instagram is viewed in this context,” White said. “The most interesting things that are going to happen are going to be what people who are there choose to share. I actually think that what’s worked traditionally is to let these communities use this product like they would naturally. It’s not about Instagram being front and center; it’s picking the content and allowing it to speak for itself.”

Vine, which is owned by Twitter and lets users share short video clips, has tapped personalities and organizations like the Council of Fashion Designers of America, Lucky editor in chief Eva Chen and Tim Gunn to create six-second videos as part of a #fashioninmotion campaign. Gunn will oversee #fashioninmotion “challenges” for bloggers and editors throughout the week with themes such as #shoes or #hair.

#Behindthefashion is a live-Vining program where designers such as de la Renta, Kenneth Cole, Rebecca Minkoff and Badgley Mischka will film a series of moments in real time for the platform that illustrate how their shows came together.

“We’re helping them enhance what they’re currently showing to a wider audience, and [it’s] really [about] being able to widen the exclusivity around the fashion week shows to a broader audience,” said Jenna Mannos, head of partnerships at Twitter. All content created on Vine will be cross-promoted and published simultaneously on the site.

And Pinterest is jumping into the fashion week game for the first time in a targeted manner.

Katie Garlinghouse, Pinterest’s head of community marketing, said hundreds of thousands of people have visited the hub in the past week and that Anna Sui, Trina Turk and Neiman Marcus have all been active pinners in the space.

“There have [also] been hundreds of thousands, if not millions, of repins of the content,” Garlinghouse said.

And fashion week, the digital version, is only just starting.

THE DIGITAL FASHION WEEK
A look at what top digital players are doing for the shows.

INSTAGRAM
• Rachel Zoe, Michael Kors, Rebecca Minkoff, Coco Rocha and more will upload photos and videos from their day as part of a #dayinthelife program.

TWITTER AND VINE
• The CFDA, Lucky editor in chief Eva Chen and Tim Gunn will create six-second Vine videos for a #fashioninmotion campaign.

• Kenneth Cole, Rebecca Minkoff and more will film a series of moments in real time for a #behindthefashion series to illustrate how their fashion shows came together.

TUMBLR
• Tumblr has taken 20 of its top bloggers and paired them with designers for brands such as Marc Jacobs, Oscar de la Renta, Calvin Klein and Thakoon.