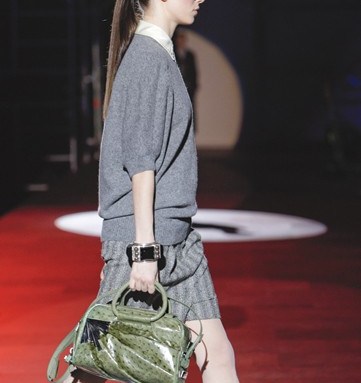 It is a sign of the times when anyone with a computer and something to say can attract the attention of designers such as Marc Jacobs or the Mulleavy sisters of Rodarte and inspire a bag or be seated in the front row of a fashion show.

Forget the B-, C- and even Z-list actresses who populated the New York shows over the last few seasons. The new celebrities are the fashion bloggers, who are courted, coddled and charmed like never before. And in perhaps a true sign of their status, they’re complaining about all the attention — even as many of them are moving beyond their blogs with deals, sponsorships and real jobs.

At Rodarte, 13-year-old blogger Tavi Gevinson of Style Rookie and her mother, Berit Engem, were besieged by the paparazzi and camera crews the second the show was over, while Kirsten Dunst walked through the crowd relatively unaccosted.

Two years ago, bloggers vociferously protested they were being ignored by the fashion world and couldn’t get into major shows. This time round, they’re being invited to any show they want, and this past weekend two conferences were held for fashion bloggers to discuss blogging.

The shift began last year. For the first time, bloggers were seated in the front row, and Jacobs named an ostrich bag the BB after blogger Bryanboy — and sent him the sample. Gevinson inspired Rodarte’s collection for Target. Dolce & Gabbana last September put major retailers, including Burt Tansky of Neiman Marcus, in the second row to make room for six bloggers. A mini uproar, at least in the press, broke out in Paris at the couture shows in January when an editor at Grazia tweeted Tavi’s hat was blocking the view at Dior. The press declared it was war between editors and bloggers, and revisited the controversy about bloggers accepting gifts (a standard practice at fashion magazines, although the Federal Communications Commission now requires bloggers to admit when they’ve received gifts or been paid to write about something).

Gevinson is now a correspondent for Pop Magazine and has reportedly been approached about a reality TV show and a book; Jane Aldridge, the 17-year-old Texas debutante who writes Sea of Shoes, designed a capsule collection for Urban Outfitters; London-based 25-year-old Susie Lau of Susie Bubble, one of the earliest personal style blogs, is now an editor at Dazed & Confused; San Franciscan Liz Cherkasova of Late Afternoon has modeled for American Apparel, Nasty Gal Vintage and Tobi, and Krystal Simpson of What Is Reality Anyway, has guest designed for Quiksilver.

“It’s given my life a lot of direction that it didn’t have before, but I started when I was very young,” said Aldridge, who was in the audience at the Chictopia blogger conference Saturday. “I’m very grateful for the experiences I’ve had. Before I started blogging, I didn’t think it was possible to work in fashion, and now I think I probably will.”

She is working on a project that “has to do with a community of fashion bloggers, like a talent agency, that will bring a little order to the way brands and bloggers work together,” she said.

Blogging “has increased the pace fashion moves at,” she said.

Most personal style blogs — and there are hundreds — do not make money. Those that do have at least several hundred thousand visitors a month and a dedicated audience of repeat visitors. More often, bloggers use the blog as a portfolio or platform for sponsorships, deals, collaborations, or jobs in marketing, fashion and media.

“Everything is going to the Internet,” said Naomi Nevitt, a new media consultant, whose clients include Rag & Bone, Pierre Hardy, Balenciaga and Proenza Schouler and who was a panelist at the Chictopia conference. “There are so many different kinds of blogs. Personal style blogs, fashion news blogs, street photo blogs. It really is about designers seeing how important this is, and the ability to circulate this information so quickly is really important. They are starting to notice it. Streaming is huge. I see personal style blogs filling the role of the traditional stylist. Just in the way a [public relations] company will lend out an item to shoot to a magazine, it’s that way for a personal style blog showing how this item can exist in people’s wardrobes.”

Even as the fashion world rushes to embrace them, though, not all bloggers are happy with the attention. At a conference put on Monday by the group Independent Fashion Bloggers, which has more than 6,000 members, a panel of some of the best-known bloggers decried the hype about blogging.

“We’re focusing on bloggers as freak beings, which I find a little offensive,” said Lau. “They’re one strand of media. Magazines are another strand.”

“A lot of the fuss is made up,” said Britt Aboutaleb of fashion news blog Fashionista. “We’re all at the shows together, and Vogue is there, too, and no one’s unhappy and she didn’t steal my seat. There’s room for everyone, everybody who wants to have a voice. The more, the merrier.”

Gevinson noted the hype “gained momentum because [the Grazia editor] Twittered she couldn’t see behind my hat. I thought they were making a joke. But all of a sudden, it’s ‘Bloggers and editors at war! Which side are you on?’”

Streetwear photographer Phil Oh of Street Peeper noted, “When there’s hype, there’s a backlash. I’m wondering when that will start to happen.”

In person, Gevinson, a self-described fashion geek, is calm amid the hullabaloo surrounding her. Her comments on her blog and in person are ironic and thoughtful. It’s impossible to imagine she doesn’t write her blog herself, as some publications, such as New York Magazine, have suggested.

Gevinson was upset to read that, said her mother, and now mostly avoids reading about herself in the press.

“It’s a lot more to think about,” said Engem as her daughter was signing autographs and giving interviews before her panel at the Independent Fashion Bloggers conference in Chelsea. “We used to live a normal life, and now we need to think about where she’s going, what she’s doing and be careful. It’s intense, but so much of it is fashion week and Internet related. So normal life at home is not affected. We don’t talk about it much at home.”

Gevinson is missing only one day of school this week to attend the New York shows, which is no different than when she was in theater, said Engem.

Jacobs met Bryanboy during a trip to the Philippines, said company president Robert Duffy. As for the other bloggers, the firm’s p.r. department usually decides who is invited. It’s all part of the bigger effect that social media is having on fashion. “It’s moving very, very quickly and I think that’s the way it is now,” said Duffy. “Information is available to everybody instantly. We’ve all learned to search on the Internet and now people are just delivering it to you and this will all evolve into something else at this point. We’re already experimenting with 3-D for our Web site, this stuff will all change constantly. I guess I was a little late, but I caught up,” said Duffy, who has been tweeting these past two weeks.

The Chictopia conference was abuzz with young women in little hats and white gloves, most of them between the ages of 14 to 25.

“I’m so excited to be part of changing an industry that traditionally has been so top down,” said Chictopia panelist Susan Koger, who founded online store ModCloth and has sponsored personal style bloggers such as Rebecca Stice of The Clothes Horse. “Department stores are obsolete,” she continued.

“You don’t want to sell everything to everybody anymore. It’s about buying new product all the time, moving quickly and reacting quickly. Street style is what is propelling it. The old pyramid has been turned on its head. It’s the girls in this room who are saying, ‘This is what we want to wear and how we wear it.’ They have a really strong voice now.”

And fashion brands are taking notice. Jennifer Wexler, marketing director of Botkier and a fellow panelist said, “We feel that social media is almost an extension of the brand. You’re putting your brand out there. Sometimes putting your brand in other people’s hands can be scary.”

Most fashion brands and retailers have some form of blogger outreach, such as sending out news and new products, affiliate programs, special events, inviting bloggers to shows and writing about bloggers or inviting guest bloggers on their own blogs.

“Social media is incredibly important to us as a brand,” said Tory Burch. “We are sharing as much of the whole experience with our customers as we can.”

The company treats bloggers as editors. “They are key influencers,” said a spokeswoman. “We hope that through their sites, they’ll introduce Tory Burch to a whole new set of customers. Having bloggers attend the presentation is a great way to reach people who don’t live in New York or can’t make it to the presentation for one reason or another. Blogs and Web sites invite a dialogue with readers and customers that is invaluable to us.”

Norma Kamali said she is grateful to bloggers for publicizing her collection with Wal-Mart.

“I really appreciate the way they interpret what I’m doing. It’s exactly what a designer dreams of. And then they share it with people. They’re leaders. It’s like the show we did about the democratization of fashion. Now there’s no elite in anything in any more.”

“Most of the opportunities I’ve gotten in fashion have been because of my blog,” said blogger and now sometimes-model Cherkasova of Late Afternoon. She spoke at the Chictopia conference and has been to many shows this week, including Badgley Mischka, Vera Wang and Dennis Basso. “Max Azria had great shoes, but other than that, kinda underwhelmed,” she tweeted.

Chelsea Kozak, a blogger, student and one of the winners in the Chictopia 10 contest to attend the conference, stood in line at the tents and got into a show because of how she was dressed. “There’s no room, I’m sorry, but I really like your outfit so I’m going to let you in,” she recounted the p.r. person telling her.