“I’m a huge Bambi fan, and the film reminds me of my mum,” said Stella McCartney, referring to the late Linda McCartney, of her Bambi-inspired ad campaign. 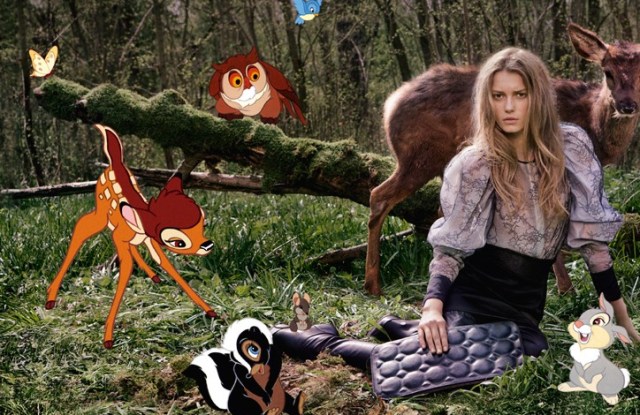 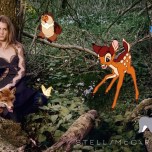 DOE, A DEER: Nature-loving Stella McCartney worked closely with her inner child to come up with a Bambi-inspired ad campaign for fall. The campaign, shot by Ryan McGinley in the woods of Worcestershire, England, features cinema’s most famous deer and his pals Thumper, Friend Owl, Flower the skunk — and assorted butterflies and bluebirds. “I’m a huge Bambi fan, and the film reminds me of my mum,” said McCartney, referring to the late Linda McCartney. “And we wanted to have some fun. The clothes in the campaign are looking quite fierce, and we wanted to contrast them with the innocence of Bambi,” she added. Model Sigrid Agren is pictured stroking a live fox, while the Disney characters have been layered onto the photos. The art direction was done by McCartney’s in-house team, together with Partner and Partner in London. The ads will break as double-page spreads in the September issues of French, Italian and British Vogue, V and Another Magazine.

This story first appeared in the July 8, 2009 issue of WWD. Subscribe Today.

EARLY LOOK: The fashion camp anxiously awaits the final counts of September issues, which are expected to reflect declines of around 30 percent across the category. But early numbers have already started to trickle in. Among the fashion magazines with a heavy luxury and fashion endemic bases, Elle will carry 21 percent fewer pages this year, or 327 compared with 414 in 2008. Harper’s Bazaar is estimated to carry between 275 and 285 pages, which is about 25 percent fewer ad pages than last year. Among the others, People StyleWatch is one of the few gainers, continuing its growth through September and carrying enough ad pages to perfect bind for the first time. StyleWatch is slated to be up 10 percent over last year. Essence will carry about 105 pages compared with 125 last year, and Marie Claire is due to carry 139 ad pages, or 20 percent fewer than last year’s 173. The full roster of numbers are due Tuesday, when Condé Nast, home of such fashion behemoths as Vogue, W, Glamour and GQ, will release its numbers.

CHAMBERLAIN EXITS TATLER: Vassi Chamberlain, a Tatler veteran and its editor at large, is leaving the title to pursue a freelance writing career. Chamberlain, according to a Condé Nast spokeswoman in London, plans to turn her Poor Little Rich Girl column — which chronicles the adventures of spoiled, social-climbing London wife — into a novel, and will continue writing for Tatler and other Condé Nast publications.

LISSY OF LEGER: Those who used to frequent New York’s Beatrice Inn will recognize the new face of the Hervé Léger by Max Azria campaign — musician Lissy Trullie, who often stepped in as DJ at the former hipster hot spot. “Her look and style resonated with our ‘urban tribe’ inspiration for Fall 2009,” said designer and chief executive Max Azria. “Besides being such a unique beauty, she’s also an incredibly talented musician.” The campaign will run online, in stores and in direct mail. Like seasons past, the brand will not be advertising in magazines. “We have never done print advertising for Hervé Léger by Max Azria — the brand is so iconic, and the word of mouth buzz is so phenomenal, we haven’t taken that step yet,” said Lubov Azria, creative director of BCBG Max Azria. “As we continue to grow the brand, it will probably be something we explore.” Richard Kern photographed Trullie for the campaign and also put together a music video, “Ready For The Floor,” featuring dresses from the fashion house.