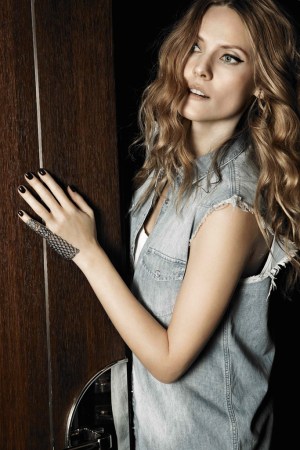 RUSSIAN DOLLS: Paris-based fine jewelry brand Gaydamak has tapped Vogue Ukraine editor-at-large and Vogue Russia contributing editor Ekaterina Mukhina for its latest ad campaign, breaking online and in select magazines next week. Paris-born Russian sisters Sonia and Katia Gaydamak, 29 and 31, respectively, launched the line in 2009 after earning degrees from Columbia University and the Gemological Institute of America. Rooted in fanciful designs and intricate shapes, the sisters’ current inspirations include “a fabulous collection of books on ancient fabrics. We like to reinterpret the ancient. But also the people we have met over the last few months, such as Zaha Hadid, have left a indelible mark on our collection to come,” said Katia Gaydamak. Wholesaling between $1000 and $25,000, the pieces are made in Italy, Israel and Hong Kong and sold in 18 stores worldwide including Le Bon Marche, Browns and Colette.