The Lee Radziwill cover and inside photos were shot by Mario Sorrenti and come with a video interview by Radziwill friend Sofia Coppola. 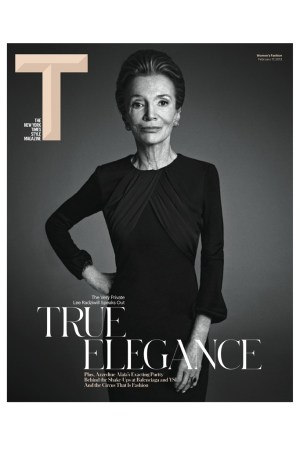 The cover is Lee Radziwill. Needleman said the idea to do a story on Radziwill began while she was still at The Wall Street Journal. She’d met Radziwill last April at a design conference in Morocco and, though the aging socialite and sister of Jacqueline Kennedy doesn’t sit for many interviews, she agreed to a profile with WSJ.

This story first appeared in the February 7, 2013 issue of WWD. Subscribe Today.

Radziwill had also been in negotiations with other publications — Vanity Fair and W, among them. Needleman promised her the cover, which the other magazines, dependent on newsstand, couldn’t afford to do.

When Needleman left the Journal, she took the Radziwill idea with her. Needleman said Radziwill threatened to pull out altogether if the story wasn’t with her, even if it was at another magazine — and, luckily, one that doesn’t have to worry about newsstand sales either.

It’s unusual for a departing editor in chief to also pack up with a story that had been conceived for her old employer, but Needleman’s decision shows her competitive drive.

The Radziwill cover and inside photos were shot by Mario Sorrenti and come with a video interview by Radziwill friend Sofia Coppola. It’s part of a relaunch of the Times’ most lucrative magazine, and the newspaper publisher wants to make sure Needleman’s T gets attention. The Times has scheduled launch parties during the fashion weeks in New York, Milan and Paris.

The New York party today at the Grand Central Oyster Bar will be hosted by Times chairman Arthur Sulzberger Jr. and is expected to draw guests including Coppola, Arianna Huffington, William Lauder, and Francesco Vezzoli. Holding a party so soon after the Times lost about 30 employees in buyouts and layoffs might seem questionable, but Denise Warren, chief advertising officer for the Times, said it’s a vital way to recognize advertisers. After all, as Times executives have repeatedly said in the past, advertising is the main reason T exists. T will be up 23 percent in ad pages to 132.5.

For Needleman, the party will bring to an end a dance that began in September when she was pursued simultaneously by Robert Thomson, her old boss, who was eager to keep her at the Journal; Jill Abramson, who needed to replace Sally Singer at T, and even a dark horse, Hearst’s David Carey, who wanted her among his stable of editors.

When Abramson approached her, Needleman already knew what her answer would be: “I had a gut reaction, like, yes,” she said.

“It was a challenge. I knew exactly what I wanted to do at the Journal, which was to bring fashion to a nonfashion audience and to make fashion interesting and desirable to that audience,” Needleman said. “Here, I think it’s more difficult in that this is a broader magazine. It’s a culturally sophisticated and more tolerant audience.”

The magazine will look very different from Singer’s T. It has a larger trim size, heavier paper stock, as well as a redesign aesthetic that ditched the Gothic typeface of the old magazine and replaced it with a custom design by creative director Patrick Li.

“I feel the Times is such a strong brand that it can handle under its umbrella a kind of distinctive magazine and that it doesn’t need to typographically reference the Gothic type,” she says.

Needleman has also created new sections. The front of book now starts with what Needleman calls a style op-ed, “a thinky piece about something in the zeitgeist,” she said. In the first issue, Suzy Menkes writes on the new breed of fashion bloggers. There’s also “This and That,” a news digest that is a mini version of the magazine. The creative team behind it, while consisting of many faces from the Journal, also includes the well-regarded stylist Joe McKenna, who proved useful in securing a profile of Azzedine Alaïa.

While Needleman’s first T is called “the fashion issue,” it also marks a new era in the life of the supplement in that she has been granted her demand for a more general interest magazine that will come out 13 times a year. Some speculate that with a stronger T, the weekly magazine is in danger of losing advertisers. But Needleman feels both magazines have different missions.

“We are about the culture of style. We’re not doing ethics or public policy or economics or foreign policy,” she said. “So much of what is interesting to me about fashion and style is not the surface decoration, but the culture of fashion, the business behind it, the craftsmanship behind it. I’m looking at fashion from all these different angles and trying to understand it as a culture phenomenon and business.”