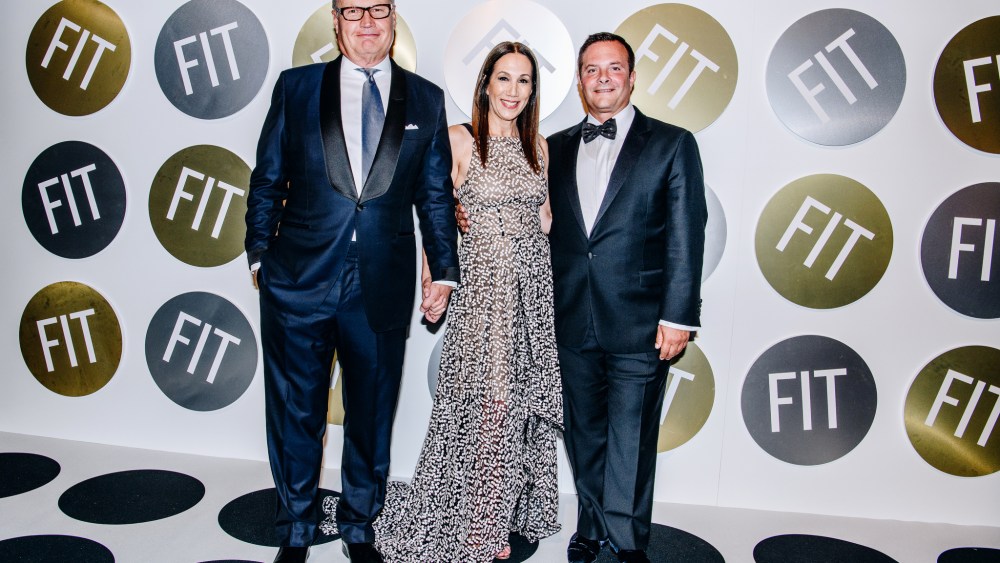 This year’s high-spirited event, whose theme was #FashionForward, raised $1.3 million to benefit the FIT Foundation, which helps FIT cultivate the next generation of creative leaders by enhancing programs, developing initiatives and providing scholarship funds to the college’s most promising students.

In presenting the award to Stanley, Rebecca and Uri Minkoff, designer and chief executive officer of Rebecca Minkoff, respectively, said their business wouldn’t be as globally successful as it is without Michael Stanley. “Michael was and is our fairy godfather,” said Rebecca Minkoff. Uri Minkoff added that Stanley never gives up and treated Minkoff’s business as if it were his own. “I was negotiating forever over an eighth of a point, and finally he said you’re asking the wrong question. The question you should be asking is, ‘when you’re in trouble and need help, will we be able to help you?’”

Uri Minkoff said his business is a “family business,” and Stanley is part of the family and they cherish the relationship.

“That’s the nicest thing anybody ever said about me,” said Stanley. He said Rosenthal & Rosenthal “had the great fortune of working with some of the most brilliant designers and brands in this industry.” He also recognized the Rosenthal family and all his colleagues at the firm. He said FIT “is so fortunate to have such a gifted leader in Dr. Joyce Brown,” who is celebrating 20 years at the helm. “Your creative and innovative leadership has made FIT the premiere fashion college,” he said.

IMG model and actress Carolyn Murphy presented to Bart and said when she started her personal journey more than 24 years ago, there was a guy from Brooklyn backstage at a fashion show, with an all-knowing grin, smiling, so self-assured and radiating positivity, “and so not the Nineties.” She said she was shy and awkward and had every hair color, wore vintage glasses, dressed second-hand and was below the “super” 5 feet 8 inches.

“We bonded over being different,” said Murphy. Bart told her that there was so much more out there than trying to be like the others, and has been “by my side and my partner in crime, but moreso someone who nurtured me to embrace myself and believe in myself.” It has always been Bart’s personal mission to break the social modes, push boundaries and be more inclusive, she said. He has encouraged people to “be yourself and cultivate and celebrate your individuality, purpose and use your voice.”

Bart, who won the Social Impact Award, said he was raised by a single mother and had an aunt who both influenced and shaped who he became, and perhaps even inspired him to manage women’s careers.

He pointed out that a current Lauder campaign that features Joan Smalls, Carolyn Murphy, Fei Fei Sun and Hilary Rhoda not only signifies inclusivity but sends a strong message “that no woman is excluded from luxury products and women of color have real spending power.”

“What we see in advertising and the runway must reflect who we all are,” said Bart. He has also advocated for plus-size models such as Candice Huffine, Ashley Graham, Precious Lee and Zach Miko to get work. “Our team worked together to push these talented models into the mainstream and it’s working,” he said. IMG also represents 70-year-old Maye Musk.

Finally, Leonard Lauder, chairman emeritus of the Estée Lauder Cos. Inc., presented Hudis with the Vanguard Award for her leadership and long-standing relationship with FIT. Lauder said many years ago, he sent her to San Francisco to work at Prescriptives and when she came back to New York she was so energized, inspired and filled with new ideas. “She did everything better than anyone else could have done it. You are our idea bank,” he said. “Every time she touches something, it develops into something great,” he added. He said she’s the first one in and the last to leave each day. “You’re the best. I can’t imagine Estée Lauder or FIT or the world today without you,” said Lauder.

Hudis said she was grateful to Leonard Lauder for the 32 “extraordinary years” they worked together and said she has been so proud to serve on FIT’s board for 20 years. She also said FIT has brought so many talented graduates to the Lauder company. She told WWD, “The first time I got the call [about the award], it was quite humbling and quite an honor.” She said she admires what Joyce Brown has done at FIT, which creates unconventional thinkers. “I believe in the school, and the students, who are so passionate,” she said.

Stephanie March, an actress best known for her role on “Law & Order” and cofounder of Rouge Makeup Salons, was the mistress of ceremonies for the evening.

“I am the biggest ‘Law & Order’ fan,” said Hudis, who often watches 10 or 12 episodes over the weekend. “When I go to bed with Cliff at night, you’re there with us,” she said about March.