In those flush times a year or so ago, food magazines like Gourmet and Bon App?tit often seemed to focus on recipes requiring the most indulgent ingredients. 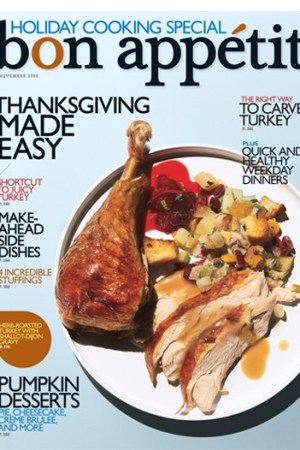 MIX A BOX OF RICE-A-RONI WITH…: In those flush times a year or so ago, food magazines often seemed to focus on recipes that required the most indulgent ingredients (remember Gourmet’s goat tacos that started with instructions on how to kill a goat?). No more. Budget-friendly recipes, as well as restaurant and wine recommendations, are rapidly becoming a larger part of the editorial mix as editors seek to cater to their readers’ new penny-pinching ways.

Take Bon Appétit, which will theme its entire January “Best of the Year” issue around Champagne taste on a beer budget (and not a microbrewery, either). “The overriding feel is it’s possible to eat well and have value and still feel indulged and well-fed without busting your bank account,” said editor in chief Barbara Fairchild. For example, in a story on stylish dinner parties, “instead of calling for osetra caviar, which costs $400 for less than 2 oz., we start out with American spoonfish caviar at $49 for 2 oz.” The story also includes a recipe for a mussel bisque instead of a lobster bisque. A wine story will cover “10 Reds and 10 Whites for Under $20,” and the magazine’s “Fast Easy Fresh” column will include a week of dinners for a total of $100 — seven entrées and a dessert included, with a shopping list (the popular column also is being turned into a cookbook, which will be released next week). As for those who can still afford to travel, the January issue will highlight Lima, Peru, as a food destination. “Your dollar goes a lot further in South America than in Europe,” Fairchild noted.

At Food & Wine, the November issue includes a story on “upcycling,” called “A Thrifty Cook’s Guide to (Almost) Free Ingredients.” The practice reuses food scraps in recipes, helping to eliminate waste. “The fantastic thing about the best restaurants is that they use everything. They would never toss a potato peel or a carrot top,” said editor in chief Dana Cowin. She believes Food & Wine attempts to feature budget-friendly recommendations in every issue, but said she made a conscious effort to review issues leading up to the holidays as the downturn in the economy dominated news headlines. For a story on theme parties, Cowin changed one of December’s “20 Super, Easy Holiday Parties” from a gift-wrapping party for presents for family and friends to one where the gifts would be for children in need. The magazine also will include a column by Lettie Teague on why Champagne is suitable in good times and in bad (to drink your sorrows away, perhaps?), with a sidebar recommending affordable bottles. Early next year, Cowin said the magazine is altering a popular column, “Chef’s Recipes Made Easy” to “Chef’s Recipes Made Cheap.” The column already has been amended on the magazine’s Web site.

Gourmet’s Ruth Reichl said the upscale food magazine has focused more on home cooking. “Lots of people who were spending time in restaurants are spending more time in their kitchens.” To wit, Gourmet’s November issue features four different types of Thanksgiving meals, one of which claims can be done in four hours, to court those who might normally have Thanksgiving dinner out. In January, the magazine will launch a techniques column called “Cooking Class.”

A GUIDE TO FABULOSITY: Anyone who has seen an episode of TLC’s “What Not to Wear” knows co-host Clinton Kelly is serious about women wearing clothes that fit properly and incorporating trends only when appropriate. As it turns out, he’s also a walking Mr. Manners guide on everything from grammar to hosting the perfect party. At the insistence of a friend who also happened to be a literary agent, Kelly came up with an idea for a book “about fabulousness,” pitched it to Simon & Schuster and then, about five minutes later, had a book deal. “I know that’s probably really annoying,” he said. “I’ve been really lucky.”

In “Freakin’ Fabulous: How to Dress, Speak, Behave, Eat, Drink, Entertain, Decorate, and Generally Be Better Than Everyone Else,” Kelly begins by taking the reader through his long journey toward “fabulousness,” which started prepuberty. “While other kids on the elementary school playground were trading baseball cards and playing kickball, I was silently debating whether to spend my first paycheck on Italian suede driving shoes or on a cashmere coat,” he writes.

During a layover in LAX on his way to a Macy’s store appearance in San Diego, where he planned to lead a style seminar on dressing properly, Kelly said he wanted to write a book that was useful, funny and provided a comprehensive guide to “overall fabulousness.” Which means he basically has an opinion about everything, such as how to chop an onion, poach chicken breast, make mayonnaise, have a signature drink, choose the right music for a party, fix a baggy shirt and avoid a dangling modifier.

He plans to spread his message during his Macy’s appearances (he’s been working with the department store for three years), while fitting in bookstore appearances when possible. “Going to Macy’s all over the country is one of the best parts of my job,” he said. “I mean, I’m there with 750 women who show up after work on a Thursday? It’s a lot of fun.” During his travels, he advises women on a budget to focus on classic pieces, with a mix of trendy items, only when appropriate. “The most important thing is that the clothing fits well. You could spend $5,000 on a Prada suit, but if it doesn’t fit well, you still end up looking like a stuffed sausage,” he said.

Kelly is the self-proclaimed aficionado of fabulousness but he has a hard time coming up with a celebrity that also fits the bill. “I know nothing about celebrities,” he said. “I’m over 40 — I really don’t care what Britney Spears is doing. All these people have personalities that are constructed — we have no idea who these people really are.” OK, so what about Sarah Palin? “Oh, I can’t comment on politics. I mean she’s — oh, I just better shut up.”