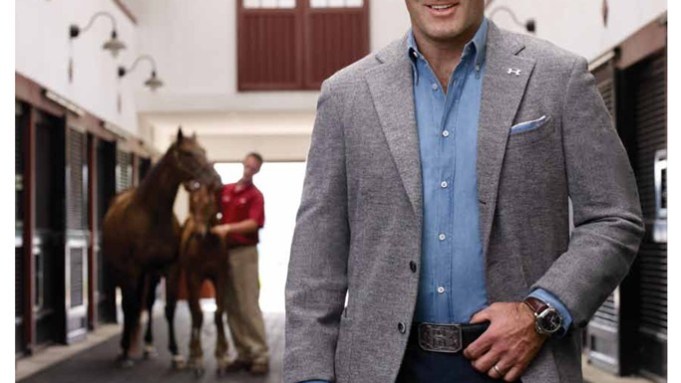 WHO HAS THE TIME?: Apparently some of the biggest names in business have zero time to shop. Under Armour’s Kevin Plank, Instagram’s Kevin Systrom, Spotify’s Daniel Ek and SpaceX’s Elon Musk are among the Forbes-photographed billionaires who wound up buying clothes from their shoots.

But getting these hotshots out of their dressed-down favorites can take some wrangling, according to Forbes style director Joseph DeAcetis. “A lot of these billionaires just want to be in their own clothes. And they’re power people,” he said. “What I tell people is that Forbes is the Vogue of 2013. It’s what everyone is reading because the economy is so talked about now.” (Forbes.com has 46 million unique visitors a month. Forbes magazine, Forbes Asia and Forbes Europe have five million readers.)

Like the rest of the accidental shoppers, Plank (actually his wife, D.J.) paid full retail prices for his five favorite looks from the Forbes shoot at their 530-acre Sagamore, Md., horse farm, which was owned for decades by the Vanderbilts. DeAcetis lined up appointments at Bruno Cucinelli and other New York outposts for her.

“What we’re trying to do is make these guys and girls look like the million dollars they are,” DeAcetis said. “They are strong, brilliant entrepreneurs. Maybe they don’t have the time or the inclination to have that product in front of them. They certainly have the means to purchase them,” said DeAcetis.

In step with Randall Lane’s marching orders to get the mag’s shoots as ship-shape as the copy, DeAcetis coaxed Justin Bieber and Richard Branson into wearing suits for their respective covers. Bieber passed up buying the Burberry and Prada suits, but splurged for the sneakers. During what was to be a half-hour shoot (max), the Virgin Group head agreed to wear a tie, provided he could slice it in two afterwards. Another time-crunched billionaire limited his shoot to 10 snaps and counted every last one.

“Not only do these guys have hectic schedules, but they are the power players of the world,” DeAcetis said. “Many of these new entrepreneurs that came up in the Nineties were adverse to great style and what was thought of in the past as dressing well for success and dressing for the job you want not the job you have. Didn’t Mark Zuckerberg wear a robe and slippers to an investor meeting?”

Women executives like LightSail Energy’s Danielle Fong have been known to dive into post-shoot shopping. The same can be said of Formula 1 racers like Alexander Rossi, who was recently photographed on the Circuit of Americas track in Austin. “These guys are really macho and as you know the spring trend for men’s wear is vibrant colors. I put them in orange pants and bold red supple leather jackets. Their workers standing around on the track were laughing at them,” De Acetis said. But Rossi followed up with a where-can-I-buy-it phone call. “This is the first tine in my career I have seen this kind of buying,” he said.