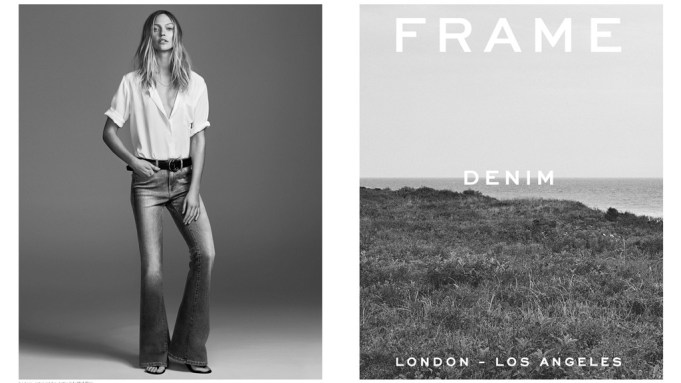 SASHA’S TURN: Frame Denim is adding another top model to its list of marketing muses. Following in the stylish heels of Karlie Kloss, Erin Wasson and Andreea Diaconu, Sasha Pivovarova features in the new spring ad campaign for the premium denim brand that is rooted in Los Angeles and London. Photographed by Erik Torstensson, who launched the brand in 2012 with Jens Grede, Pivovarova dons a striped T, bell-bottoms, button-up shirt and crisp white jean jacket, overalls and jeans, among other pieces, all styled with a minimalist aesthetic by George Cortina. Didier Malige and Jeanine Lobell round out the hair and makeup team. Photos of the seaside and lush forests, juxtaposed next to Pivovarova’s black-and-white portraits, set the mood for the season. Breaking in Industrie, Porter and other magazines, the ads stand on the opposite side of the style spectrum for Pivovarova’s modeling portfolio. Aside from Frame, she’s also the face of Balenciaga’s spring marketing campaign.