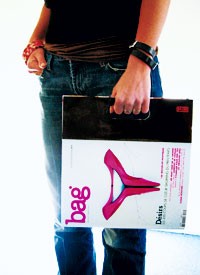 PARIS — Shopping is a word that needs no translation into French — as a new crop of Lucky-like magazines here attests. Two new specialist titles have joined the fray since last year’s launch of the midmarket bimonthly title Shopping by Prisma Press, which sells an average of 200,000 copies per issue.

“We live in an age where shopping has become a leisure activity in its own right,” said Monique Majerowicz, publisher of Marie Claire, the group behind the bimonthly Mods magazine that first hit newsstands last month. “There has been such a huge evolution of products, labels and outlets that women need guidance about and a helping hand — a bit like preparing for a trip somewhere.”

Primarily a High Street-friendly fashion guide, Mods packs in beauty and fashion tips — such as how to choose the right underwear — and comes equipped with a page of stickers to slap on to favorite looks, similar to the American Lucky’s Post-it-like notes. The debut issue of Mods sold roughly 170,000 copies.

Meanwhile, in its second issue, the thrice-yearly BAG (an acronym for Beautiful Address Guide) bills itself as a high-end hunter of cool Parisian shopping spots. “The French magazine market is becoming more and more specialized,” reasoned Gaël Duval, BAG’s founder and publisher. “Competition is tough at the moment, but it was the right time to market it because nobody else had responded to that demand.”

With a cover that folds out to form bag handles, the glossy features store openings, trends, fashion spreads and boutique maps alongside profiles on hip French fashion personalities. BAG sold 44 percent of its first issue to hit newsstands, or approximately 20,000 copies.

However, some question the long-term prospects for the category. “I see it as an opportunistic strategy to surf the trend for consumerism,” observed Laurence Bernheim, director of studies for women’s press at Interdéco, the sales arm of Hachette Filipacchi Media. “But to center on something so specific will never work as well as a traditional magazine formula. What women want is the right alchemy of features, fashion, psychology and sex-oriented articles — or simply things that make them laugh. And that will always sell better in the long run.”