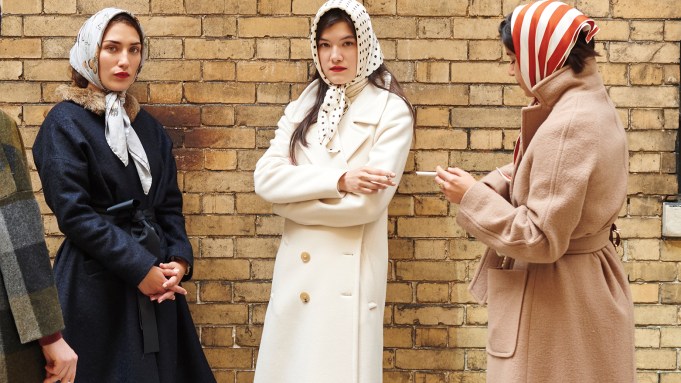 Frances Valentine has unveiled its second advertising campaign, for fall.

“This is the first campaign where we got into the groove of what the company narrative is,” managing partner Andy Spade said, describing the shoot’s concept as “urban suburbia.”

A cast of petite characters is shrouded in babushka headscarves, pictured wearing mixed-print heels and ankle boots. The ads were photographed by Susanna Howe in Andy and Kate Spade’s Upper East Side townhouse. They will appear on the brand’s digital channels, beginning in July.

“Definitely with more years of experience, now we are older and it has a level of refinement we didn’t know before,” said Spade.

Frances Valentine — Kate Valentine Spade’s first venture since departing her namesake brand in 2007 — said it has exceeded its sales targets for the first quarter, but declined to reveal actual figures. The brand sells at U.S. department stores including Nordstrom and Bloomingdale’s, and online with Shopbop and Zappos. It will enter retailers including Lane Crawford and Forty Five Ten for fall.

“This time around, I’m 10 years older, it’s been 10 years — you are not a different person, I didn’t come back with a punk rock collection. I feel more comfortable and less nervous about my decisions, sometimes they are not cohesive and [I don’t feel the need] to design with a theme,” said Valentine Spade.

Both Spades said they are in no rush to enter categories outside the accessories fray. “We are not trying to come out of the gate saying we are going to be this big lifestyle company. We are making bags and shoes. If we move into other categories, that will happen on its own — we’re not forcing anything right now,” she said.