Although the designer's marketing assault in support of Karl is largely digital, he loves paper too much to ignore print. 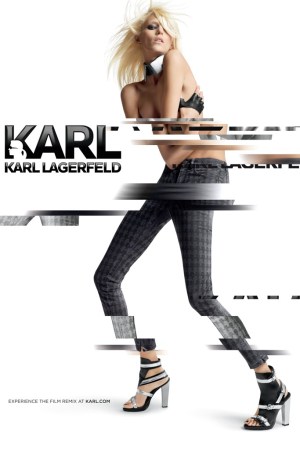 FREEZE FRAME: Although Karl Lagerfeld’s marketing assault in support of his new masstige line Karl, which debuted on Net-a-porter.com Wednesday, is largely digital, the German-born designer loves paper too much to ignore print. The campaign, shot by Lagerfeld and featuring models including Anja Rubik, is to break in the March issues of Vanity Fair and Vogue. Outdoor placements in France are to follow next month, according to a spokeswoman.

This story first appeared in the January 26, 2012 issue of WWD. Subscribe Today.