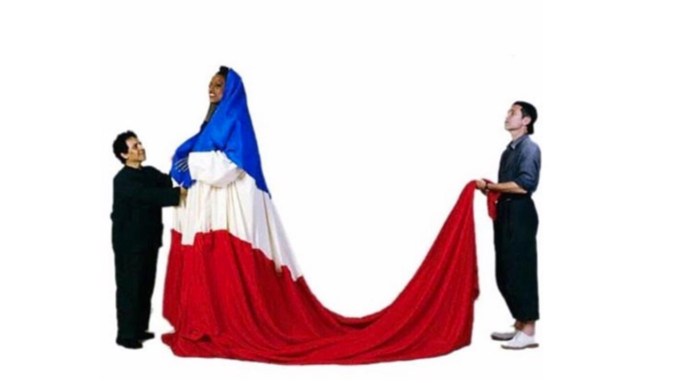 COVER STORY: The European press was jubilant on Monday in the wake of Emmanuel Macron’s win as France’s next president, while designers and fashion industry figures reacted with relief – and enthusiasm.

As reported, the center-left politician garnered 66.1 percent of votes, versus far-right leader Marine Le Pen in the second round of voting Sunday. The race had been described as one of the most unpredictable that the country has seen in decades.

The first spread in the newspaper featured a black-and-white photo of the politician amid a sea of admirers taking snaps. The accompanying editorial was titled “Une dette envers Le peuple” (or “A debt to the people”).

Coverage of the election ran through the first 21 pages of the 40-page issue.

Two-thirds of Le Figaro’s front page was devoted to a photo of Macron with the headline “La victoire en marchant” (or “Victory on the move”) – a play on the name of Macron’s party En Marche (or On the Move). Twenty-two pages of the newspaper were devoted to the political coverage.

Les Echos’ front-page headline was “La France qui ose” (or “France that Dares”) and there was a photo of Macron with his fist in the air. The entire special edition was devoted to the election.

The Wall Street Journal’s international edition ran with the subhead: “Victory of novice over Marine Le Pen marks major success for pro-EU establishment.” One full page inside the paper was about the French election.

The Financial Times started the coverage on its page one with the headline: “Macron sweeps to victory in French presidential election.” Then a page inside had articles about French politics.

The New York Times’ international edition featured on its cover a photo of torn overlapping posters of Macron and Le Pen.

In Britain, the BBC – and much of the British press – called Macron’s victory a relief, and said his election could be a positive as the country begins Brexit negotiations later this year.

“The new president is not going to be as Brexit obsessed as some imagine. He has other fish to fry,” said James Landale, the BBC’s diplomatic correspondent, pointing to the support and coalitions that Macron will need to build in the National Assembly.

He said the British government had long ruled out any cooperation from Paris in the Brexit negotiations, and in many ways, “Macron represents continuity. And just think of the alternative. If Marine Le Pen had won, the EU would be in chaos.”

British Prime Minister Theresa May congratulated the pro-business, pro-EU Macron on his win last night    calling France one of Britain’s closest allies “and we look forward to working with the new president on a wide range of shared priorities.”

In a front-page opinion piece in The Times of London, Matt Chorley, Red Box editor, said that by putting in her call of congratulations early, “and allowing the newcomer to present himself as a statesman during his visit in February, he now owes her. It probably won’t be long, as the Brexit talks become increasing fraught, before she is calling in that favor.”

The Daily Telegraph also pointed out that Macron’s election would provide “much-needed stability in Europe” but conceded that his hardline pro-EU stance “would appear to offer scant comfort to Theresa May when it comes to Brexit negotiations.”

Like fellow members of the press, Peter Foster, Europe editor of The Telegraph, said Macron will find it a challenge to build a parliamentary majority without a major campaign machine, and will struggle to re-unite a broken France.

Designers expressed relief and joy over their social media channels.

“Today is a new day for France. We have moved forward together against extremism and we are marching to make our magnificent country, France, shine again. I grew up with values of love, respect and hope: I’m proud that these values are a part of my past, of my present, but also of my future,” said Olivier Rousteing, creative director of Balmain. “We are faced with a battle that’s not only political but ideological. This evening ‘Freedom, Equality and Brotherhood’ regain their colors.”

Photographer Nick Knight congratulated “the wonderful people of France on the election of a new pro-Europe president” and for “overwhelmingly rejecting the fear mongering and popular nationalism of the far right. I only hope we do the same here when we have our chance.” He added the hashtag #remain from last year’s Brexit referendum campaign.

“Europe has a new hope, the world has a hopeful future,” said Diane von Furstenberg.