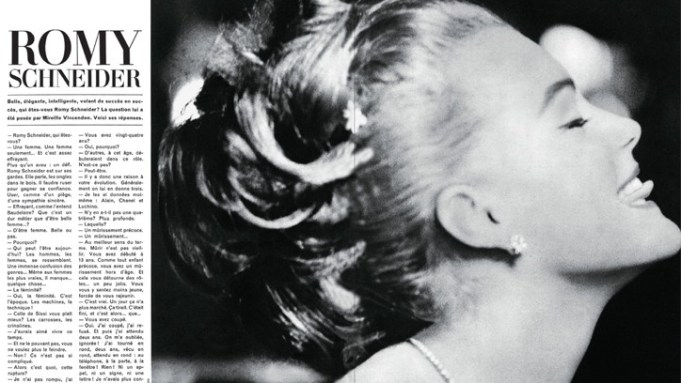 BIG EASY: French Vogue’s October issue, marking its 90th anniversary, will be a vrai whopper, and très collectible, too. Weighing in at 622 pages and with model Lara Stone on the cover, it is slated to hit newsstands around Sept. 20, in time for Milan Fashion Week and a costume ball in Paris on Sept. 30 to celebrate it. Since the French title’s 75th anniversary issue had an historical slant, editor in chief Carine Roitfeld decided to take another tack, seamlessly mixing the past and the present to showcase the magazine’s enduring threads of daring and modernity. “Vogue Paris has always played the card of audacity,” Roitfeld said, showing a 1976 Guy Bourdin image juxtaposed with a 2004 Patrick Demarchelier one, each oozing a hard-edged erotic glamour. Roitfeld didn’t show all her cards, but hinted at some surprises inside. “We couldn’t do a lukewarm issue,” she teased.

The magazine will carry 276 traditional advertising pages, plus 104 pages of congratulations from a wide swath of international designers. That compares with a total of 166 ad pages last October.

Roitfeld and her team pulled together a well that spans more than 150 pages, corralling its regular photographers to contribute new shoots: Mario Sorrenti, David Sims, Terry Richardson, Steven Klein, Hedi Slimane and the duos Mert Alas and Marcus Piggott and Inez van Lamsweerde and Vinoodh Matadin. Slimane’s feature focuses on a classic — the little black dress — but on a surprising model: the 11-year-old daughter of Inès de la Fressange. Showing how timeless some Vogue features were, Roitfeld opted to republish an arresting black-and-white portrait and interview with actress Romy Schneider exactly as it was in 1962, including the miniscule photo credit for Helmut Newton. “The archives of Vogue are extraordinary,” she enthused.

As a gift to readers — in France, at least — the issue will come polybagged with a portfolio of oversize photographs from the nine decades, all unbound on thick paper and ready to frame. The cover price has been bumped up to 5.90 euros, or about $7.50 at current exchange, to cover the exorbitant printing costs, and Vogue increased the global print run by 40 percent, to 280,000 copies, in anticipation of strong demand. Roitfeld noted the October issue also will introduce new typography and an “easier-to-read, clearer” design that will be fully evident in the November issue. — Miles Socha

A BIGGER NICHE?: Gilt Groupe may be about to add a magazine publisher to its team. Word has it Niche Media’s chief executive officer, Jason Binn, is in talks about a consulting deal with the site to serve as chief adviser to its chairman and founder, Kevin Ryan. Exactly what kind of “advice” that would entail could not be learned, and both Gilt and Binn declined comment. In addition to Gilt, Ryan is behind Business Insider and ShopWiki. — Amy Wicks

CINDY SHERMAN WEARS CHANEL: Cindy Sherman is playing dress-up again, this time with Chanel couture. For the fall issue of Pop, the New York-based artist — whose past forays into fashion include creating 1994 promotional materials for Comme des Garçons and appearing in a 2005 Marc Jacobs campaign shot by (and featuring) Juergen Teller — took on the French house’s archives to create a booklike insert of typical self-portraits. Dressed in 17 looks, ranging from Twenties designs by Coco Chanel herself to Karl Lagerfeld creations from the Eighties and more recent seasons, Sherman eschews elegance and glamour: There are no hunched-over, hands-on-hips couture poses here. Instead, she appears uncomfortable and stiff in the clothes, wearing a variety of wigs and dour expressions, and looking all the more awkward against Photoshopped-in backdrops of views of Iceland. “My whole idea for the group was that they were like icons or statues…from a shrine — maybe the shrine is for housewives or something,” said Sherman, who was approached by Pop editor in chief Dasha Zhukova to do a fashion-inspired series. (Initially, Sherman sent the magazine looks she liked from a number of different designers, but the two settled on an all-Chanel shoot when the company offered to open up its archives.)

While the basic concept for the Pop story evolved from a series of work she recently showed in Kiev, the artist said she had no idea how difficult it would be to work with couture. “The dresses were so unbelievably tight on me — normally I wear a size 4, but these were like size zero,” she said. “I mean, I was aware that they were going to be small when I was choosing the outfits, but what I didn’t realize is that with couture, even if it looks loose, there’s a supertight corseted zip-up slip on the inside.” Hence her static poses. Her facial expressions, which she distorted further in Photoshop, also reflect her fashion frustrations. “Some of the scowls that are on my face were also because I was just so pissed off that these godd—n designers make things so small that even a normal-sized woman can’t fit into them,” she explained.

But that pique doesn’t stop Sherman from donning designer clothes. Though she doesn’t wear much Chanel (“A couple of years ago I bought a great denim outfit with matching high heels, but I don’t even know that I ever wore it, actually…”), she does wear a lot of Prada, Marni, Zero + Maria Cornejo, Narciso Rodriguez and Balenciaga. In fact, Sherman teamed up with Balenciaga for a 2007 French Vogue story and images from the series will be on display at the Chelsea Balenciaga store during Fashion’s Night Out.

As for such commercial work, Sherman said: “It’s usually when I’m in between projects and I just want a perfect excuse to work on something where there’s a deadline and I can experiment. If I get [personal] work out of it, great. If not, it was just fun to do.”

A TEAM: Paris-based designer Giambattista Valli has donned the guest editor cap for the latest edition of Belgium’s A Magazine, to be launched in tandem with the inauguration of Valli’s Paris flagship in late November. The issue, which will be distributed internationally in print and as an iPad app, is to explore definitions of beauty, with contributions from a variety of artists, photographers and style icons including Sasha Pivovarova, Nan Goldin and Chiara Clemente. A digital preview will go online Oct. 10. Typically a twice-yearly affair, A Magazine will return to its regular rhythm with the Valli edition. Since the release of the Proenza Schouler edition in June 2009, the magazine’s team has been sidetracked by the construction of a digital archive project, Ablogcuratedby.com, where each month an archive issue is rereleased online and blogged about for one month. Past designer curators of A Magazine include Yohji Yamamoto, Riccardo Tisci and Haider Ackermann. — M.S.