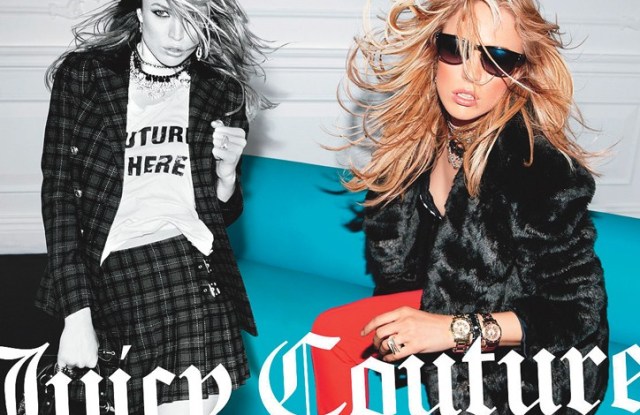 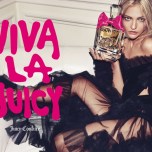 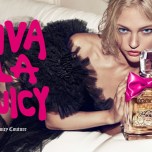 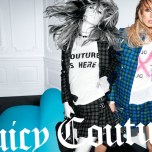 FRESHLY SQUEEZED ADS: Juicy Couture is breaking out two new ad campaigns in September magazines. One is for Juicy Couture sportswear, with the tag line “Couture Is Here” that’s written across model Raquel Zimmermann’s T-shirt. The ads, which show stylish images of Zimmermann with wind-swept hair, were shot in Manhattan by Inez van Lamsweerde and Vinoodh Matadin. “We really wanted to stand behind the couture in Juicy Couture with this campaign so we played more to our fun, glamorous unapologetic side,” said LeAnn Nealz, president and chief creative officer of Juicy Couture. “We also wanted to showcase the true evolution of the brand’s most iconic item, the tracksuit, styled with modern ready-to-wear pieces.” Print ads will run in Vogue, Teen Vogue, Harper’s Bazaar, Elle, Vanity Fair, Interview and select regional magazines, as well as select key outdoor markets, including New York.

For ads for its Viva La Juicy fragrance, which is one of the top 10 prestige fragrances in the U.S., the company chose Sasha Pivovarova as the model. The ads, which feature Pivovarova lying on a couch holding a big bottle of Viva La Juicy, were also shot by van Lamsweerde and Matadin. “We took our inspiration from a beautiful girl in the afterglow of a wonderful evening,” said Nealz. “She gets dressed in couture, goes out to a party, has a great time, and even possibly gets into a bit of trouble. Nothing says ‘Viva La Juicy’ better than that.”

Juicy officials declined to disclose the fall ad budget for both campaigns. The fragrance ads are slated for the September editions of InStyle, Nylon and Teen Vogue, and the October editions of Vogue, Teen Vogue, Marie Claire and Nylon.

FRENCH TOAST: Bernard Arnault, Karl Lagerfeld, Stefano Pilati, Donatella Versace, Tommy Hilfiger, Alber Elbaz, Franca Sozzani and Riccardo Tisci were among those who assembled at the Élysée Palace in Paris Wednesday to watch French President Nicholas Sarkozy decorate a Chanel-clad Anna Wintour with a Legion d’Honneur award of merit. Afterwards, a broader swath of the international fashion pack was invited to toast the prize at the gilded residence of Charles Rivkin, United States Ambassador to France. British-born Wintour already boasts an Order of the British Empire.

“We had this very nice cocktail, where Anna made a very funny speech,” said Lagerfeld.

ESSIG, ESQ.: Hearst Magazines completed its executive shuffle on Wednesday with the appointment of Jack Essig as senior vice president, publishing director and chief revenue officer of Esquire and the newly formed Men’s Enthusiast Group, which includes Popular Mechanics, Car and Driver and Road & Track. Most recently, Essig served as senior vice president and publisher of Men’s Health and Women’s Health at Rodale.

A spokeswoman at Rodale said a successor for Essig will be named later this week. Essig is arriving at Esquire on the upturn: For the first quarter, the magazine’s ad pages rose 2.4 percent to 158.