The layoffs came a week after the presidential election. Fusion staffers received a “cryptic” calendar invite for a 10 a.m. meeting the following morning. Minutes before they were set to meet, a companywide e-mail from chief executive officer Isaac Lee went out describing various reorganizations at Fusion parent Univision Communications. Buried toward the end of the lengthy note was the news that some positions at Fusion would be eliminated as a result. Rushing to the meeting, many of Fusion’s staffers didn’t see the note, or a story on the some 200 to 250 layoffs that the company fed to The Washington Post under embargo, which was published online at the same time the meeting was scheduled to begin.

It was reported that Univision slashed 6 percent of its workforce and that Fusion was hit particularly hard with 70 cuts, amounting to around a third of the staff on both the editorial and business sides. Just a few months before the layoffs, Univision had purchased Nick Denton’s bankrupt Gawker Media sites for $135 million. By November, efforts were under way to integrate Gizmodo Media Group, as the Gawker sites were now known, into the company and Fusion’s editorial staff had recently voted to unionize, like the staffs at the Gizmodo sites. With a sizable portion of Fusion’s editorial team heading for the door, many at the company wondered if the site would close altogether.

WWD has learned that the Fusion site will be rolled up into the Gizmodo Media Group, which — somewhat confusingly — is part of what is called the Fusion Media Group. David Ford, a spokesman at Fusion Media Group, confirmed the news. Those still at Fusion will move from their offices in SoHo to GMG’s Flatiron headquarters this month, along with the team from The Root, the company’s African-American-centric site that was acquired last March.

The Root also speaks to the “woke” multicultural Millennial audience that is Fusion’s target demographic. (For those not in the know, “woke” refers to being aware, especially to racial and social injustice.) The Root will exist under the Gizmodo Media Group umbrella, according to Ford, and both sites will switch to Kinja, Gizmodo’s proprietary publishing platform that Univision acquired when it bought the Gizmodo network of sites.

On the business side, Fusion’s sales team has been centralized, so sales staff can now combine the company’s web traffic numbers to add scale and sell by category across the 11 sites that make up the Fusion Media Group, a larger structure that includes the eight sites under the Gizmodo Media Group umbrella as well the Onion, Clickhole and the AV Club, which became part of FMG last year when Univision bought a majority stake.

“The beauty of Fusion is that it has a perfect name for what we are trying to do,” Gizmodo Media Group chief executive officer Raju Narisetti told WWD. “Also, the brand is not fully formed in anybody’s mind. And that actually gives me the opportunity to do a lot with it.”

A source from Fusion’s business side said the changes “make sense” for the business.

“It’s been proven that it was a challenge to sell Fusion as a property of its own,” the source said, adding, “I loved what Fusion stood for. It’s a great property — the voice of a new America.”

Fusion, which marked Spanish language network Univision’s attempt to create an English language TV channel when it launched in partnership with ABC/Disney in 2013, debuted its digital news arm with minimal fanfare in early 2015 — initially, it was known more for its serious hiring spree and heavyweight backers than for its content.

The digital venture snatched up big name journalists and showered them with TV money, doling out salaries around the $300,000 and $500,000 range for marquee hires, insiders said. Fusion would not confirm those figures.

The goal was to develop a digital property for English-speaking Millennial Hispanics that could stand shoulder to shoulder with the Vices and Voxes of the media world when it came to investigative and lifestyle content. But after finding the English language, Hispanic Millennial market too limited from a readership perspective Fusion broadened its mandate to cater to diverse Millennials.

Even then, though, Millennials didn’t exactly flock to Fusion. Even on Millennial-friendly platform Snapchat, Fusion’s channel was swapped out of the “Discover” platform for a channel by sister site the Onion last summer.

This didn’t bode well for Univision, which had been losing money on Fusion to the tune of between $20 million and $35 million a year, according to filings with the Securities and Exchange Commission.

In the spring, Disney exited the venture and not long after, Univision, which is in the process of preparing for an initial public offering, posted a loss of $30.5 million in the third quarter on an 8.3 percent decrease in revenue to $734.8 million. The company cited a weaker advertising environment and a $199.5 million impairment charge related to the write-down of radio broadcast licenses as a reason for the loss.

To accelerate growth, Univision turned to a strategy of acquisition, betting big on Gizmodo Media Group — and it worked. Web traffic increased from the 10 million average that Fusion.net was pulling in upward of 60 million in a month, according to comScore. As a result of Fusion Media Group’s expansion, Narisetti has an ambitious target of growing the revenue by 30 percent over the next year with the help of a more robust ad selling strategy and the continued development of Kinja Deals, an affiliate e-commerce site.

“It’s a big number, but I think we can do it because now we can give advertisers a lot more of any particular category they are looking for,” he said.

With the addition of Gizmodo’s network of sites, the robust — and in some cases, highly paid — Fusion staff was harder to justify.

“We wanted to build up something organically and staffed up. But when we realized we could actually acquire a bunch of verticals with a big audience for a reasonable price, then it didn’t make sense to continue to build organically,” said Narisetti, who came to run Gizmodo Media Group from News Corp. at the end of September. “And that unfortunately meant that people had to be let go.”

To some, Fusion was just another cautionary tale of new media hubris. Others saw it as a genuine attempt to reach a new demographic by a new kind of media company. Unfortunately, building a new media company from the ground up was a hard sell given the mandate of clicks and ad dollars.

While there was worry among staff that layoffs were inevitable after the Gizmodo acquisition, there was reason to believe that they wouldn’t be imminent. After all, it wasn’t that long ago that Fusion was on a hiring spree (“Congrats on your job at Fusion,” was a running joke on Media Twitter).

And the election gave the journalists an opportunity to do stories in their “woke” wheelhouse (LGBTQ rights, immigration issues, Black Lives Matter, gender issues), making the voice of Fusion more relevant than ever. That notion was conveyed in a cheerleader-y note to readers by Fusion editor in chief Dodai Stewart the day after the election:

“Fusion’s mission is to tell stories of underrepresented voices, and we have done so, consistently. Going forward, that duty is even more important. We are essential. It’s time to go all in,” she wrote.

Another promising sign that jobs were secure was that Fusion was in the process of transitioning its Sex and Life section into Rouser, a branded vertical (much like The Cut is to New York mag) focused on sexual health and wellness that, while aimed at woman, was committed to gender inclusivity. Fusion was hiring to fill several new roles at Rouser and it was set to launch the week after the election. Instead, the entire section got laid off. 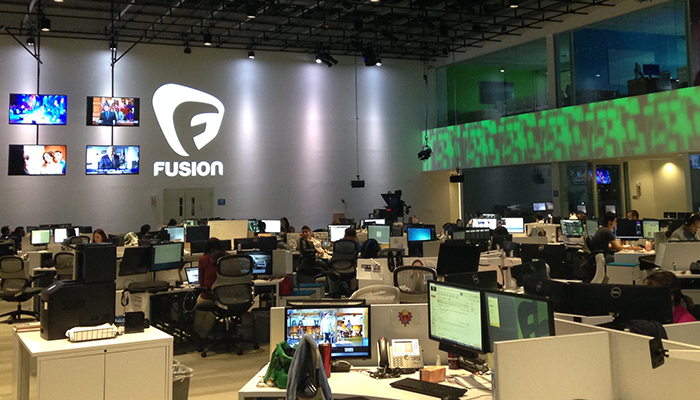 When Fusion.net (the one thing the company never acquired was a dot-com) began, it struggled to convey an identity. Its original Twitter handle “This is Fusion” prompted the question of what, exactly, “this” was (insiders jokingly referred to it as “ConFusion”).

Early big name, big money hires, many of whom also worked on Fusion’s TV network in some capacity, included Reuters finance writer Felix Salmon; Kevin Roose, who was hired away from New York magazine to be a senior editor; Alexis Madrigal, who came from The Atlantic and ran the site until earlier this year; Vice’s beanie-clad drone expert Tim Pool; Jezebel founding editor Anna Holmes; former Jezebel editor Stewart, and NBCNews.com director Hillary Frey. All those men, except for Pool, who is said to have taken a package, are still there. Of the women, only Stewart has stayed — and was recently promoted to editor in chief.

But as Fusion found its identity as a progressive site for multicultural Millennials (another inside joke termed it “Woke.net”), many felt that the company structure often failed to reflect that shift. An insider at the company griped that, for all its emphasis on diversity, the firm is still primarily “run by dudes.”

Perhaps unfairly so, Salmon is widely seen as emblematic of this discrepancy. There is general newsroom anger that, following the layoffs, he was still standing at his standing desk (literally, according to insiders). Many sources cited his sporadic contributions to the site in contrast to his big salary — which is, naturally, subject to much newsroom gossip. But his main role seems to be as a representative of the company, frequently appearing at parties and as a talking head on TV on the company’s behalf. In his free time, the formerly post-text Salmon has recently branched into the personal newsletter space, something Deadspin took shots at him for in its year-end list of “the least important writers” (to be fair, they also included themselves). Several insiders say his contract is up in the new year, but Fusion declined to comment.

“It’s been a bumpy couple of months, but things are settling down. Part of the reason I want to bring everyone together is because just the physical fact of losing your colleagues and having a newsroom that is half empty is not good,” Narisetti said. “It will be good to put some of the difficulties of this year past us and focus on what needs to be done.”

According to Narisetti, there are no more layoffs planned for the coming year — in fact, Gizmodo Media Group will be hiring.