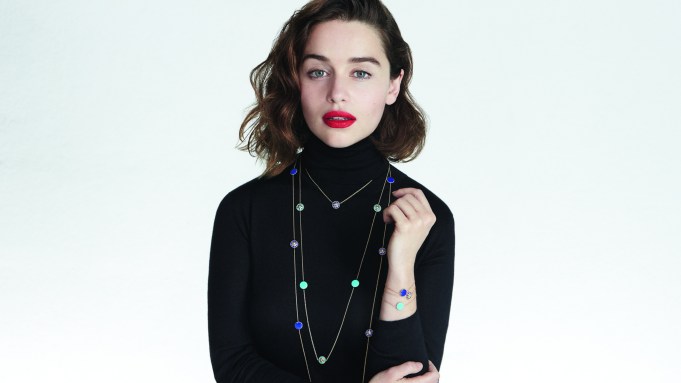 ENGLISH ROSE: Dior has a new leading lady. The French fashion label has tapped Emilia Clarke as the face of its Rose des Vents fine jewelry collection, marking her first campaign for a luxury brand. The “Game of Thrones” star was photographed by Patrick Demarchelier for the campaign, set to break on Friday in Madame Figaro magazine in France.

In one image, the British actress sports a natural look, with brown hair and minimal makeup. Her unbuttoned white shirt shows off acres of pale skin, as well as necklaces from the Rose des Vents line in yellow and rose gold, diamonds, white mother-of-pearl and pink opal.

In another, she wears bright red lipstick and a black turtleneck, accessorized with necklaces in lapis lazuli and turquoise.

Clarke was among the front-row guests at Dior’s spring ready-to-wear show, held in October in a flower-filled dome in a courtyard of the Louvre museum in Paris.

In addition to filming season six of “Game of Thrones,” in which she plays Daenerys Targaryen, she will be seen next year in “Me Before You,” the screen adaptation of a novel by Jojo Moyes, and “Voice from the Stone,” a drama set in the Fifties that will see her don vintage creations.