Armani turned to Sølve Sundsbø for his spring campaign, and, for the first time, to model Joséphine Le Tutour. 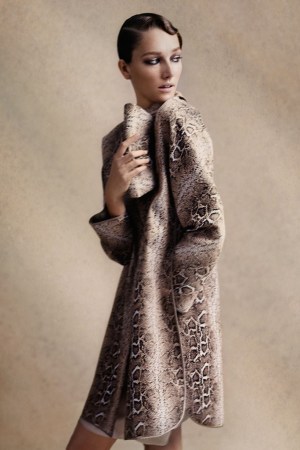 SOME THINGS CHANGE, SOME DON’T: Those spring ads just keep coming. Giorgio Armani turned to Sølve Sundsbø for his spring campaign, and, for the first time, to model Joséphine Le Tutour. While in line with Armani’s signature look, the almost abstract, painterly images, taken in London, are marked by a suffused light and a sense of movement seen, for example, in a flowing gown in a pink-sandy shade. The desert-like atmosphere is enhanced by Le Tutour standing barefoot on a floor of tiny pebbles or wearing a reptile coat and clutch. The campaign is bowing globally in January.

Over at Brioni, creative director Brendan Mullane is once again working with New York artist Collier Schorr for the men’s wear brand’s campaign. Model Dominik Bauer was photographed by Schorr in Los Angeles against the backdrop of the minimalist boulder house of Eric Lloyd Wright, a work-in-progress construction based on designs by his grandfather, Frank Lloyd Wright. Mullane explained that, with the images, he wanted “to show the character of the Brioni man, a powerful man with a more seducing element, and as a dominant intellectual dreamer.” The designer was intrigued by “how architecture meets nature,” and how the misty ocean view from the hills was in harmony with the stone and shapes of the house.

The campaign is set to bow globally in mid-January.