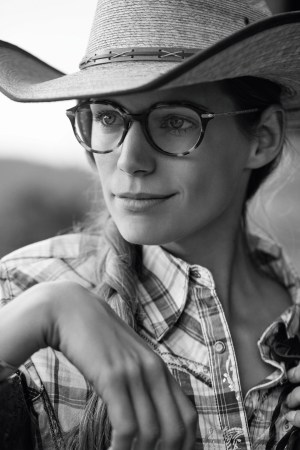 A ballet dancer; a food blogger; an industrial and interior designer; a Miss Rodeo Oregon, and a film director. For his Frames of Life 2016 campaign, Giorgio Armani seeks to capture the story of five individuals with very different backgrounds and paths who share a passion for their professions — and Armani’s eyewear designs. The black and white images by Serge Guerand portray the subjects in intense moments of concentration.

The Sicilian-born Damiano Artale is seen training, leaping or striking a pose against the background of the city of Venice; former model and food blogger Mimì Thorisson is busy cooking at her country home in Medoc, in the South of France; born in Istanbul, the 24-year-old Caner Yildirim is photographed working on a surfboard he’s designed or holding a yoga pose; rodeo queen Nicole Schrock, who started riding at 13, poses with a horse, and Austrian film director Richard Rosin is captured gripping his camera in the snow, on a mountaintop.

Armani’s glasses, produced by Italian eyewear giant Luxottica, have a retro touch but are highly technological. For example, on one model the brand’s logo is engraved on the temples with an innovative sonotrode technology that uses ultrasonic vibrations to achieve a precise, clean finish.

The images will bow on Monday on Armani’s Web site and social media. Details and video content, including backstage footage and interviews, will be available on framesoflife.com.