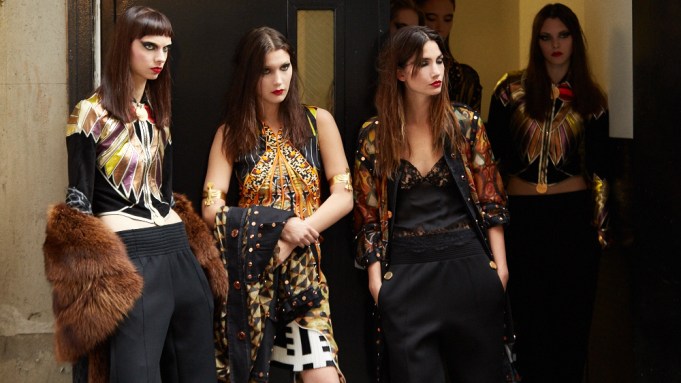 While known for provocative campaigns that have in the past featured transgender and albino people, A-list actresses and even a rival Italian designer, Tisci’s fall effort is all about making his fierce runway fashions more legible — and approachable.

“My show is always a strong injection of craziness and dream,” he said in an exclusive interview. “I’m sure that some people understand, but I want the general public to understand how to deal with it.”

Indeed, when models whisked through a maze-like set at the Carreau du Temple at the Givenchy show last March, one registered indelible impressions — kaleidoscopic prints, flashes of gold and military detailing. Yet it was easy to miss the new Horizon bag slung on a bandolier, or notice Tisci’s new post-bomber obsession: the donkey jacket, a workwear style with leather yokes.

In the double-page spreads that are to break in the September issues of American and Japanese Vogue, with men’s images out first in L’Uomo Vogue, Tisci and stylist Carine Roitfeld assembled catwalk togs into a variety of moods and attitudes.

In fact, the designer also invited merchandisers to provide input. “I literally wanted to know which were the jeans that sold best, the fashion pieces that sold best and with Carine we did the looks until we got the groups,” he said.

Ten years into his tenure at the couture house, Tisci is keen to telegraph that the Givenchy fashion universe embraces a broad swath of customers. To wit: He now structures collections in three parts — classic, urban and seasonal fashion — to accentuate his range as a designer and to maximize business.

The ad images strewn before him on a big leather ottoman, Tisci pointed to the diverse moods and — in some cases — a narrative related to the zeitgeist or current affairs. If there’s something zen about a group shot of four women, their creamy outfits with Egyptian falcon prints matching the painted brick walls, consider the location: a yoga center in Brooklyn.

“You know the big thing at the moment everyone is talking about is spirituality,” Tisci said. “And it’s not only about God or Buddha — it could be energy. I have friends that do ayahuasca,” he said, the latter referring to a Peruvian brew said to prompt spiritual revelations.

Another image depicts a group of women storming out of an office building near Saks Fifth Avenue’s flagship. All have their hair pulled back and wear sleek black pantsuits enlivened with piping.

“Pure elegance, powerful women,” Tisci said of the ad image, which also spotlights his boxy Horizon bag. “As well, I think what’s happening in America now is that women are getting more and more power and I’m happy about that because, in certain countries, women are still abused and killed because they are women.”

But mostly the ads, lensed by Givenchy regulars Mert Alas and Marcus Piggott, hammer home his runway-to-reality theme, even if it is a heightened sense of reality. For example, one group shot shows young women mixing leopard prints and Egyptian motifs with tougher, urban fare, including jeans and knit caps. “Now you see a lot of girls mixing streetwear with Givenchy bags, Chanel bags,” he said. “This campaign shows that I’m keeping my eyes fixed on what’s happening out there in reality. And that, I think, is my strength. My first thing is being real and looking at what is happening out there.”

Indeed, a fervent traveler, Tisci said he always plunges into the real life of residents and explores rough-and-tumble parts of today’s metropolises.

Tisci, who was nursing a ligament injury at the time, negotiated the shoot in a wheelchair, shuttling between five locations in several Manhattan boroughs with a large group that included 27 models. They range from young discoveries including Greta Varlese and Matilde Rastelli to seasoned models and regular members of the Givenchy gang, such as Mariacarla Boscono and Irina Shayk.

“People always expect Givenchy to have a very strong message,” he said. “The message is about my community and how to make a dream become a reality.”