Cindi Leive, the magazine's editor in chief, called the March issue the first true reflection of the changes in the masthead. 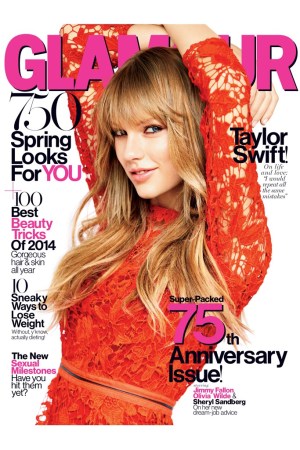 GLAMOUR’S MARCH MAKEOVER: Cindi Leive, editor in chief of Glamour, thumbed through the March issue of her magazine from her corner office in Times Square, showing off what she called the first true reflection of all the recent changes in the masthead.

Featuring Taylor Swift on its cover, accompanied by an interview penned by Leive herself, the magazine is shaking up its well features, and it’s starting with this issue. Feting Glamour’s 75th anniversary, the issue, which hits newsstands today, is focusing more on its heritage, as well as placing a greater emphasis on fashion.

Trading off its heritage as a career-focused women’s magazine, Leive said she’d be writing a monthly column called “Step into my office,” in which she will interview a successful woman offering up advice to readers. Leive’s first interview is with Facebook’s Sheryl Sandberg.

Also new to the book is an ongoing feature on designers, with Rag & Bone’s Marcus Wainwright and David Neville leading things off. The issue also includes a fashion spread shot by Sebastian Kim in Condé Nast’s soon-to-be new home at 1 World Trade Center. To date, Vogue has been the only other publication to shoot there.

“We will be doing more designer coverage. Our readers are interested. Women are much more knowledgeable about the fashion industry,” Leive said, adding that the decision came from the staff, and not from Condé Nast artistic director Anna Wintour, who has been consulting on Glamour since last fall.

Asked about Wintour’s role, Leive was up-front, although she glossed over the rumors that her relationship with Vogue’s editor in chief has been strained at times.

“In terms of Glamour, it’s been like a great, really positive collaboration and, you know, obviously I avail myself of her counsel on things like photography and fashion because how lucky are we to have an artistic director who happens to know more about fashion than anyone in the universe?” Leive said. “She understands the brand DNA of Glamour. She’s got vast experience and incredible wisdom about fashion photography.”

As a result, Glamour has tapped a host of Vogue-approved photographers, including Patrick Demarchelier, who shot Swift for March.

Leive, who offered that Wintour is still advising on the magazine, has been shaking things up since the artistic director starting popping up in the corridors of Glamour. The editor hired Paul Ritter of Elle as the magazine’s new creative director in October, as well as Jillian Davison, who left Vogue Australia, to become Glamour’s fashion director in November. She also appointed Laura Ferrara, senior editor of Marie Claire, for the newly created post of senior editor at large. Ferrara begins March 1.

Perhaps Glamour’s biggest hire came last June when the magazine poached publisher Connie Anne Phillips from InStyle. Prior to Phillips’ addition, Glamour, one of Condé Nast’s biggest money makers, had been struggling. Although it reported advertising pages up 2.3 percent in 2013, Media Industry Newsletter said that Glamour saw ad pages dip 4.2 percent in 2012, and in 2011 it saw them drop 7.2 percent. But the magazine was able to log its strongest first quarter in five years, with advertising up 12 percent, or 34 pages, in 2014 versus the prior-year period. Leive, who noted that March was up 8.2 percent, credited Phillips for her ability to find new advertisers and platform partners, such as the dating site Tinder, which will roll out a new program later this month.

But back to the March issue. The real star, according to Leive, is Ritter’s redesign, which is a sleeker and more detailed iteration of the prior issues. Ritter said his design is inspired by the “everyday chicness of the American woman.”

“We are the quintessential American brand. The scope of it is exciting,” he said. “One in every 10 women in America reads Glamour. That’s fun to work with.”