The editor in chief looks back at her reign and prepares to publish a coffee-table tome of some of the magazine's best photos. 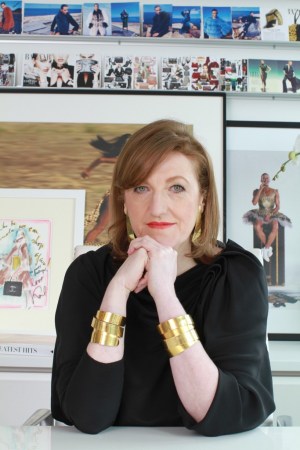 NEW YORK — Glenda Bailey sipped an iced coffee at the Mandarin Oriental hotel bar during a recent afternoon and talked about how famous she used to be. Indeed, years before becoming the editor in chief of Harper’s Bazaar, Bailey — known these days for avoiding the limelight — was glaringly lit by it and couldn’t leave the house without being recognized.

That was back in London in the Nineties, when Bailey made Marie Claire UK one of the hottest magazines in town, so much so that she was featured in an American Express commercial. Her spot was shown repeatedly on TV and her face was plastered all over the city. She was Queen of the Newsstand.

“I had to leave the country,” Bailey said with typically British droll humor. “I became an editor because I love the editing process. I didn’t want to be a celebrity.”

Her wish was granted when Hearst asked Bailey to come to New York to take over the U.S. edition of Marie Claire, where she once again drove the numbers up. Besides, American magazine publishing already had a star: Anna Wintour. It didn’t need another one.

Marie Claire became a fixture on Adweek’s hot list four years in a row and the trade publication named Bailey editor of the year in March 2001. But insiders thought she would eventually want more. Around this time, it became clear to Hearst brass that a change was needed at Harper’s Bazaar. The upscale fashion title was struggling at the newsstand and the buzz was gone.

In May 2001, Bailey succeeded Kate Betts as editor in chief of Bazaar. “It had lost its identity,” Bailey said, looking back on her 10 years at the helm. “It was time to help save an institution and that’s what happened.”

Whether Bailey has “saved” Bazaar is open for debate. Its circulation has been relatively stable during her tenure at around 700,000, but Bazaar remains ranked at best number three in the fashion magazine stakes and most often number four. Then there are the continual rumors that Bailey would be replaced, which have been going on for at least five of the 10 years she’s been at the magazine’s helm.

She’s still around, though. And she clearly engenders respect from the fashion world, if not downright affection. People were only too willing — indeed, eager — to sing her praises — from Demi Moore to François-Henri Pinault of PPR, Alber Elbaz to Diego Della Valle. Most of the comments focused on Bailey’s no-nonsense honesty and almost everyone talked about her via telephone, not e-mail. No assistants, no go-betweens — all the calls came straight to this reporter’s cell or office phone.

“Glenda’s quite a force,” said Kristina O’Neill, executive editor who has been with Bailey since the beginning. “She has very, very big ideas and wants us to make them happen. I will say that professionally there is never any ambiguity with Glenda. You always know where you stand.”

Another former Bazaar editor put it more bluntly: “You’re either doing it right or wrong when it comes to Glenda. There is no in between. She’s black and white. She’s an extreme perfectionist and if something didn’t work out, she would read every e-mail off my computer to see what went wrong. She would follow up herself.”

Some allude to behavior that can border on the obsessive, a controlling personality and sometimes a very hot temper. However, the top of Bazaar’s masthead has been extremely stable during her tenure. One thing they all know: she’s very hands-on. Bailey will call photographers, writers and actors on behalf of the title. She phoned Moore to discuss a cover idea. She wanted the actress to pose on a floating staircase next to a giraffe. It’s a stunt that probably wouldn’t be featured in any other fashion magazine. Bailey maintains that it shows her sense of whimsy when it comes to clothes. “When she called me and told me, I wasn’t sure at first,” Moore recalled. “But she was really into it and convinced me.”

She’s talked Domenico Dolce and Stefano Gabbana into dressing as Batman and Robin for a photo shoot and also persuaded her good friend and Lanvin designer Elbaz to wade into the water in Central Park wearing a suit for a portrait. “I didn’t have time after the shoot to go home and change so afterward, I headed to the CFDA Awards [where he was honored as best international designer] and I’m soaking wet — my pants and my shoes,” Elbaz said. His shoes were so wet they went squish, squish, squish each time he took a step.

Pinault said Bailey prides and distinguishes the magazine by taking bold risks. He called her a maverick and iconoclast. “The landscape of fashion today is driven by Glenda’s determined spirit and her insistence on challenging and inspiring her reader,” he said.

For instance, she coaxed William Klein back into fashion photography. “I went to see him for three years, to try and talk him into working with Bazaar,” Bailey recalled. “He hadn’t done fashion work for 40 years. One day he finally agreed.” What made him change his mind? “He’d been serving me the same cookies for three years and they were stale. He knew I wasn’t going to leave him alone.”

When she talks about Bazaar it’s like she’s talking about her baby, a magazine she’s nursed for 10 years. “I came in with creative solutions,” she said, ticking them off in a seemingly well-rehearsed litany: “I was the first person to begin doing a subscriber cover. We were the only magazine to go backstage after Yves Saint Laurent’s last collection. Tom Ford gave us the magazine exclusive on leaving Gucci. Stefano Pilati gave us his first interview. Susan Orlean interviewed Martha Stewart for her first interview after the ‘incident.’”

In addition to Orlean, Cathy Horyn, Suzy Menkes and Candace Bushnell have contributed. She also called upon famous friends including Rita Wilson, the actress and wife of Tom Hanks. “She asked me to write about the collections in Paris,” Wilson recalled. “I was spending the summer in Paris. I said I’d never written before and had no idea how to even begin.” Wilson is now a regular contributor.

Bailey has no interest in publishing a high-minded, pretentious fashion magazine, calling the idea of it “old fashioned.” She wants to bring fashion to the masses and make it fun and accessible. Cases in point: she’s shot Karl Lagerfeld as a rap star, Giorgio Armani as Fred Astaire, and put the Simpsons in a fashion spread.

“Glenda loves fashion and Bazaar is traditionally a real fashion book but she’s also glued into pop culture at large,” added Michael Kors, who’s known Bailey for more than 20 years. “She’s got her ear to the ground and she always seems to know what’s next.”

But her own future at the title is one that has been bandied about in the press for years. It seems that whenever an editor leaves a competing publication, in the U.S. or abroad, that name is floated as a successor to Bailey at Bazaar, from Carine Roitfeld to Bailey’s colleague Lucy Yeomans at Harper’s Bazaar UK. The speculation has been particularly rampant over the last few months.

“Any editor at the top of their game has to deal with that,” Bailey said, dismissing the rumors. “It would be naïve to believe everything you read about yourself in print. I just laugh it off.”

The rumors may have picked up again for a few reasons, not the least of which is the newly crowded fashion magazine field at Hearst after the acquisition of Elle and the arrival of its editor in chief, Robbie Myers. Then there is the naming of Carol Smith as Bazaar’s publisher, succeeding Valerie Salembier. Luxury fashion titles have been on an advertising roller coaster the past few years and Bazaar is no different. It was down 26.3 percent from 2009 versus 2008 and up 17.8 percent last year, compared to 2009. During the first quarter of 2011, Bazaar was down 11.3 percent, according to Publishers Information Bureau and for the first half of this year, it’s down 5.4 percent, according to Media Industry Newsletter. Smith has been at Bazaar for less than a month and said March will be her first issue. “We didn’t know each other before and if she did know me, it was from stealing pages from her,” Smith said of Bailey. “Or trying to. But I’m here now to help her take this into her next decade.”

The first decade will soon be recapped in the form of a coffee table book, “Harper’s Bazaar Greatest Hits,” that Bailey laboriously edited herself last summer while staying at a rented house in the Hamptons. It’s broken down year by year, from her first cover (Gwyneth Paltrow) to the many zany fashion shoots, along with plenty of models. In September, several images from the book will on display at the International Center for Photography, followed by an international and U.S. road show that will see events in London, Milan and Paris, as well as five U.S. cities. The book’s publisher, Abrams, is printing 20,000 copies, quite an aggressive plan for a coffee table book.

After poring over the book, Bailey declines to pick a favorite image. Instead, she’s focused on the future, not the past. “I’m looking forward to new opportunities,” said Bailey, and then makes a surprising admission for an editor in chief of a major fashion magazine: “I’m still learning. You know, the American sensibility is different. In Europe, sex sells. In America, it’s hair.”