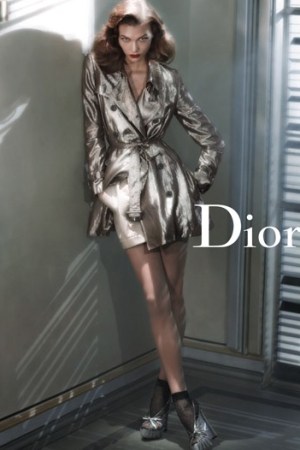 SHADY LADY: How do you convey the spirit of an entire movie in one image? That was the intention of John Galliano in Dior’s spring-summer ad campaign, photographed for the first time by Steven Meisel and slated to break in a range of international fashion titles next month. “Karlie Kloss smoldered with the same intensity and wide-eyed look as a young Lauren Bacall,” Galliano said of his chosen model for the season. “I love the smoky, sophisticated atmosphere of the image. This feels very right for now — escapist and sensual.…You can start a whole script just by staring into her eyes.” Galliano noted the campaign, echoing the Dior show last October, was inspired by “shadowy film noir cinema” and updated by Meisel to create a “modern-day billboard siren.”

Meanwhile, Dior ambassador Marion Cotillard, who has been winning plaudits for her singing and acting chops in “Nine,” tests out her pipes for the French house in a music video making its debut on the Internet Jan. 14. Scottish rockers Franz Ferdinand wrote the music and lyrics for “Lady Rouge,” the latest installment in an online saga built around the iconic Lady Dior handbag. This musical episode, set in New York City, has Cotillard portraying a working woman who transforms into a torch singer at night, appearing from behind a velvet curtain to belt one out. Cotillard featured earlier on ladydior.com in the short thriller “The Lady Noire Affair,” directed by Olivier Dahan, with a forthcoming installment by filmmaker David Lynch that was shot recently in Shanghai.

NEW DEALS: Clearly it’s a new year that’s going to be filled with new strategies to jump-start business. Two Condé Nast fashion titles, Vogue and Lucky, are launching partnerships this week with e-commerce shopping sites. On Friday, Net-a-porter’s outlet site, theOutnet.com, will introduce a series of flash sales exclusively with Lucky. The sales will be promoted in the February issue of Lucky and luckymag.com, and will be accessible only to the magazine’s newsletter subscribers. Every Friday, for four consecutive weeks, merchandise such as a 3.1 Phillip Lim jacket and a Mulberry bag will be offered at discount prices. As the clock ticks on each “going, going, gone sale,” the price will drop. Kim France, Lucky’s editor in chief, said the magazine is working with theOutnet.com, in part, because it carries the brands seen in the magazine. “It’s part of an established brand, but at the same time, it’s emerging and it felt good to be a part of that,” said France.

Meanwhile, Vogue is offering up ready-to-wear looks that are less than $500 on Gilt Groupe, based on the magazine’s “Steal of the Month” page. The sale ends Jan. 18.

A DIFFERENT LOOK: There will be no more glamour shots of Angelina Jolie or images of a vacationing Kelly Gray for St. John going forward. “[Jolie] overshadowed the brand,” said chief executive officer Glenn McMahon. “We wanted to make a clean break from actresses and steer away from blondes and cleanse the palate.” This led to hiring model Karen Elson, who was shot by photographer Greg Kadel in a bare studio for the spring campaign. “We needed to show a modern point of view of St. John,” McMahon added. “We have evolved.”

The ads, directed by executive vice president of design George Sharp, will launch in the February issues of Vanity Fair, Harper’s Bazaar and Vogue. McMahon said the print media buy is up slightly and he is in talks about digital outreach, spending on which he predicts will be up 15 percent.

The site will post exclusive, limited-time deals such as 30 percent off the bill or a free bottle of wine at high-end eateries around the city. (Nemser wouldn’t name New York spots planned for the launch, but participating Los Angeles eateries include the acclaimed Pizzeria Mozza and celeb-fave Nobu.) Bill Sertl, a former travel editor at Gourmet, will oversee the New York-based staff. Nemser also has sought counsel from Sertl’s former boss, Ruth Reichl, a Nemser family friend.

A native New Yorker, Nemser, 30, was practically raised in restaurants. Her father invested in several throughout the city. “We grew up with a table at Elaine’s,” Nemser said. “Whether or not I love the food is one thing, but that table, ordering my spaghetti Bolognese with cheese on top off the menu, there’s nothing that makes me feel more like I’m at home.”

Nemser plans to bring Blackboard Eats to five more cities over the next few years and expand the site’s content. Membership is free, though that may change if revenue from advertising doesn’t cover costs.

As she sees it, New York is ripe for a discount dining site. “High maintenance is no longer cute, and I’m not sure it quite ever was,” said Nemser, who splits her time between Venice Beach, Calif., and Manhattan. “New Yorkers are careful. We pride ourselves on finding ways to cut corners in a concrete maze where opening your wallet is really easy.”

And Bill Sertl isn’t the only ex-Gourmet staffer who’s found a new gig. On Tuesday, Hearst Magazines named Diane DePaul — formerly associate publisher at the food title — associate publisher/advertising of Marie Claire, where she will be reunited with her Gourmet boss, Nancy Berger Cardone, who was appointed vice president and publisher of the Hearst fashion mag last month. DePaul replaces Tami Eagle Bowling, who has left the company.